Man breaks into airport, impersonates officer to try and get near Pope Francis 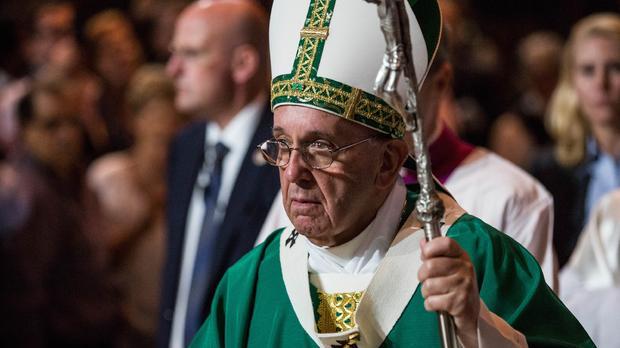 He supposedly wanted to give the Pope his business card and talk to him and other world leaders about changing the world.

Whatever his intentions, it was how the 39-year-old man did it -- by falsely impersonating an officer and driving his black SUV along with a motorcade onto the John F. Kennedy airport tarmac, with five bullets but no gun in his trunk, according to a criminal complaint filed in a New York court -- that got him in trouble.

The man got onto the tarmac on Saturday, about 10 hours after Pope Francis had flown from there to Philadelphia. It wasn't clear if he knew the pontiff had already gone.

That's not the only place he may have infiltrated during the Pope's visit. A senior New York City law enforcement official who has been briefed on the investigation said the man told investigators he used his retired New York firefighter badge and ID to get into Washington's Basilica of the National Shrine of the Immaculate Conception on Wednesday.

He admitted helping a woman to her seat in an effort to get closer to the Pope, who was then canonizing Spanish missionary Junipero Serra, according to the source. The man drove to New York after that event.

The U.S. Secret Service, which coordinated security for Francis' now concluded visit, said in a statement Monday that it, "in conjunction with other law enforcement agencies is currently conducting an aggressive investigation into these allegations."

"The Secret Service goes to the utmost extent to provide dignitary and VIP protection, intelligence and counterterrorism assets, explosive device mitigation, interagency communications, critical infrastructure and airspace security," the federal agency said. "These assets were brought to bear in full force this week and last, in Washington D.C., Philadelphia, and continue to be deployed in New York to protect the hundreds of foreign dignitaries in attendance of the UN General Assembly."

The man drove a black Chevrolet SUV Saturday to JFK airport, blending in with other similar vehicles that had gone there to pick up an Italian delegation, the New York City law enforcement official said.

At one point, according to the complaint, he slowed down and flashed "a silver object to the security guard and then (drove) through the checkpoint."

About 1½ hours later, around 7:30 p.m., his vehicle was stopped again. The complaint states that the man presented "his driver's license and a retired FDNY badge and ... stated, in sum and substance, that the Secret Service had allowed him through before."

"But ... upon request," the complaint added, "the defendant could not give the name of any Secret Service agent who had authorized him to be there."

Authorities searched his trunk and found a 9-millimeter magazine "containing five hollow point ... rounds of ammunition" and a plastic bag with marijuana in his cup holder, according to the complaint.

After being brought into an interrogation room, the man allegedly pulled apart a chair to expose its sharp staples and said, "I can hurt you really badly with this."

He also told investigators, according to the New York law enforcement source, that he wanted to meet the Pope and other world leaders and "change the world."