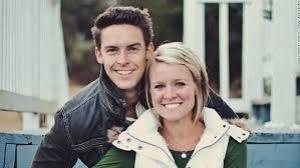 (CNN)Officers in Indianapolis have arrested a man in connection with the murder of Amanda Blackburn, 28, a pregnant woman who was shot and killed in a home invasion, police said.

Early Monday, Police Sgt. Kendale Adams named the suspect as 18-year-old Larry Taylor. He faces a preliminary charge of murder in the November 10 shooting. Marion County prosecutors will decide upon a final charge.

Detectives from Indianapolis' Violent Crimes Unit worked together with the Gangs Units and with federal marshals to take Taylor in.Amanda Blackburn, who was married to Resonate Church Pastor Davey Blackburn, was 12 weeks pregnant when she died, CNN affiliate WXIN reported.

The couple's 1-year-old son was home when the shooting occurred, but was unharmed. Pastor Blackburn discovered his wife after returning from the gym that morning, the couple's church said.

Amanda Blackburn was taken to Indiana University Methodist Hospital in critical condition, where she later died.

"My wife was such a beautiful, gracious, loving woman of God," Davey Blackburn said in a message to his congregation then. "I have not only lost my ministry partner and support but also my very best friend. There is no way to prepare yourself for circumstances like these."

Blackburn said he will take time to grieve and focus on his young son, all the while remaining optimistic.

"I hold firm to the belief that God is still good, that he takes our tragedy and turns it into triumph, and that the best truly is yet to come."