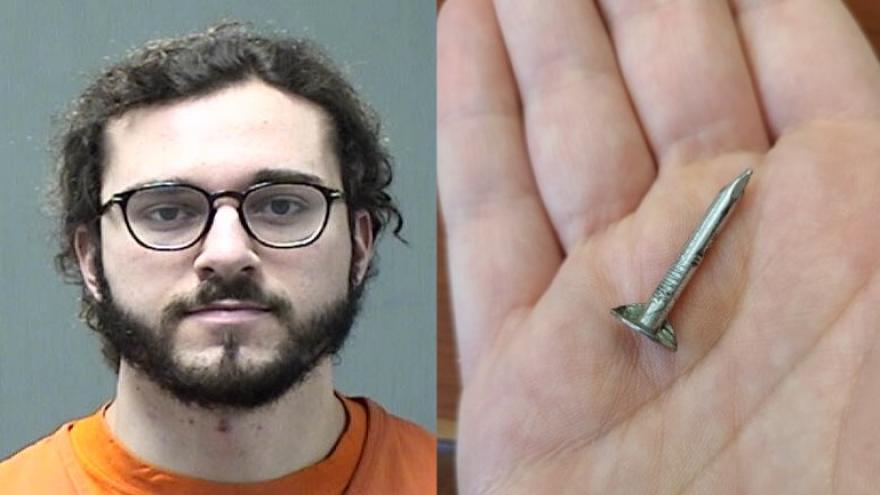 OZAUKEE COUNTY, Wis. (CBS 58) -- An arrest has been made in connection to a serial nail dumping investigation in Ozaukee County.

Since late spring of 2020, authorities accuse 27-year-old Theodore Drazovic of intentionally placing nails and screws on roadways of various intersections within Ozaukee County -- the majority of the instances in Grafton. Officials say nails were also located in the entranceways of apartment complexes and businesses. Grafton police collected 48 reports from citizens noting damage to their vehicle tires. The total damage was worth more than $7,000.

On Dec. 28, approximately 30 nails were found at the intersection of Lake Shore Drive and Donges Bay Road in Mequon, and a short time later another 56 roofing nails were found at lake Shore Drive and Ravine Drive. The same day, officials say a report came in saying Theodore Drazovic had purchased two boxes of nails from the Grafton Ace Hardware store.

While collecting the nails, Ozaukee County officials located the Drazovic's vehicle driving on Falls Road and conducted a traffic stop. Authorities located an empty box of roofing nails in the vehicle.

When questioned, officials say Drazovic initially denied being involved in any nail dumping incidents. However, in a later interview, Drazovic admitted he was the source of the nail incidents. He told investigators it was not his intent to damage other people's cars, but rather he believed people were following him and he would throw nails out of his car when he felt threatened by them.

Drazovic has been charged with one count of criminal damage to property.