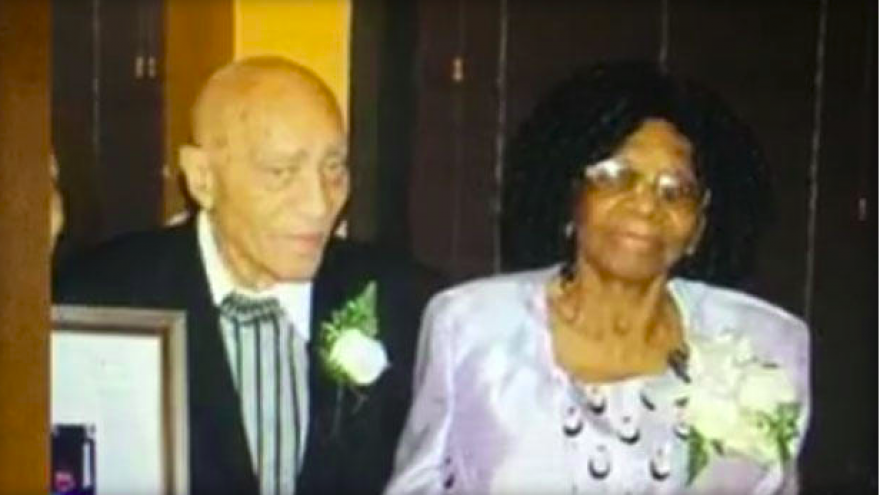 NEW YORK -- Police in New York City say a 91-year-old man died last week after he and his wife, 100, were tied up during a home invasion robbery.

CBS New York reports that Waldiman and Ethlin Thompson were tied up in their Brooklyn brownstone by four suspects on Wednesday, and robbed of $5,000 in cash that was kept in a lock box.

A medical examiner ruled that 91-year-old Waldiman Thompson, who had heart problems, died from sudden cardiac arrest after being attacked. Police sources told the station his hands were tied behind his back, and his face smothered with a pillow and blanket.

His wife, 100-year-old Ethlin Thompson, managed to free herself and call 911. She was taken to a hospital with minor injuries.

Neighbors tell the station Thompson has been leaning on her faith to come to grips with losing her husband after 30 years. The New York Times reports the two met at a Brooklyn bus stop when Ethlin Thompson was 70.

"All they had was each other," Anil Lopez, 34, the couple's top-floor tenant, told the New York Times.

The couple was reportedly a neighborhood fixture who were often seen greeting passersby as they sat near a makeshift potted garden on their patio.

"Whoever did this, it's evil, it's evil in their heart," neighbor I.C. Serapio, told the New York Times, crying. "They are in their last days. It is not fair, you just took this man's life."

"It's a shame what happened to these people, and it shouldn't go unpunished," Scott Konop told CBS New York.

"Punished? I want to see them past punished," said neighbor Jobie May.

Police so far haven't named suspects or made any arrests. They tell the station they are reviewing surveillance video and gathering evidence from inside the home.