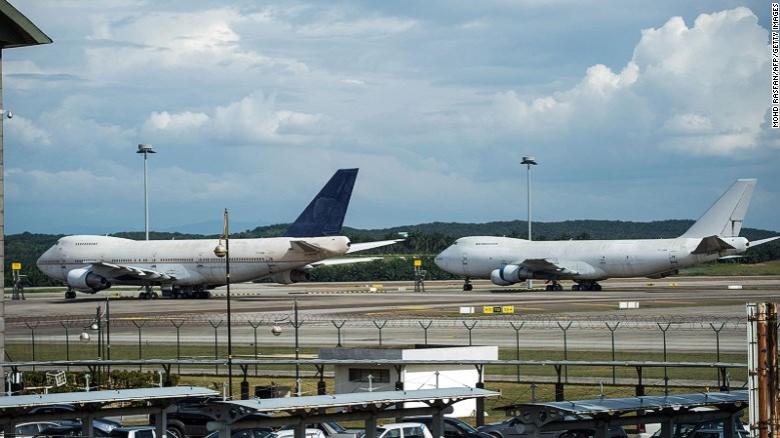 Someone abandoned not one, not two, but three of the massive cargo jets at KLIA Airport in Kuala Lumpur, Malaysia.

Airport officials, eager to clear the massive clutter, took out ads in Malaysia's The Star and Sin Chew Daily newspapers asking for the owner to please come get your planes.

"If you fail to collect the aircraft within 14 days of the date of this notice, we reserve the right to sell or otherwise dispose of the aircraft," the ad states.

The notice includes photos of the orphaned jets -- two white and one "off-white" 747-200Fs.

It adds that cash raised in the sale of the 747-200Fs would be used to pay off expenses and debts.

Malaysia Airports general manager Zainol Mohd Isa told CNN the aircraft have been parked at KLIA for more than a year, having been abandoned at different times.

It's not clear who now bears responsibility for the aircraft and any related charges.

"They've yet to pay the parking fee -- where do we send the bill?" Isa said.Several aviation databases list the Boeings -- identified by their call signs TF-ARN, TF-ARH, TF-ARM -- as belonging to leasing firm Air Atlanta Icelandic, but that company says it sold them on in 2008.

Since then, the aircraft appear to have changed hands several times.

Malaysia Airports says it's entitled to sell the Boeings under the country's civil aviation regulations if no owner comes forward ."The giving of such notice by way of advertisement is a common and reasonable step in the process of debt recovery especially in cases where the company concerned has ceased operations and is a foreign entity whereby exhaustive steps undertaken to find a contact person have not been successful," it said in a statement.

"This step is also a common process undertaken by airport operators all over the world when faced with such a situation."

Isa said that storage space wasn't a problem at the airport, adding that the three Boeings are the only aircraft currently abandoned there.

The abandoned aircraft aren't the only potential aviation sales to make headlines in Malaysia.

Malaysia Airlines, the flag carrier that in 2014 suffered twin tragedies with the disappearance of flight MH370 and the shooting down of MH17 over Ukraine, is currently said to be looking to sell or lease its fleet of six A380s.