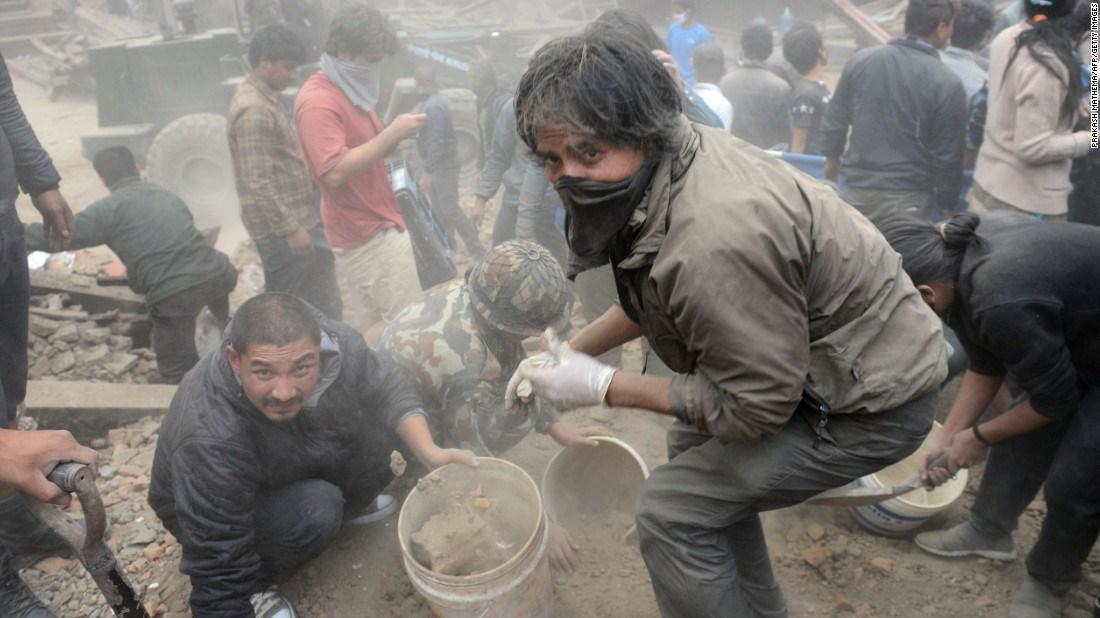 A powerful aftershock jolted Nepal on Sunday as the Himalayan nation struggled to cope with the aftermath of a catastrophic earthquake that had struck a day earlier, killing more than 2,000 people and leveling scores of buildings.

But it was still enough to create fresh panic among already traumatized residents.

\"People are running and everything is shaking,\" said Kushal Neogy, a staff member of the aid group Catholic Relief Services in Kathmandu, the Nepalese capital.

\"It is really shaking very hard and strong,\" he said live on CNN as the aftershock rattled the city. Sirens were wailing and dust was rising into the air, he added.

Climbers also said it set off fresh avalanches on Mount Everest, where at least 17 people were reported to have been killed on Saturday.

Rummaging through debris for survivors

The epicenter of Saturday's huge quake was less than 50 miles northwest of Kathmandu, at a depth of 9.3 miles, which is considered shallow and more damaging than a deeper quake. Sunday's occurred closer to Everest, 40 miles east of the city, at a depth of 6.2 miles, according to the USGS.

Like many other areas of Nepal, Kathmandu is facing a colossal challenge dealing with the devastation from the disaster.

Whole streets and squares were covered in rubble in the capital, with an estimated metropolitan area population of around 3 million residents. Stunned Nepalis stared at temples that had stood stalwart for generations and now were reduced to piles.

Locals and tourists ferreted through mounds of debris in search of survivors. Cheers rose when victims emerged alive -- but mostly bodies turned up. The injured ended up being treated outside overflowing hospitals, where crowds of people gathered looking for relatives.

Dozens of bodies were pulled from Dharahara, the historic nine-story tower that came crashing down during the quake. A backhoe chipped away at the nub left protruding through its crumbled ruins.

The death toll in Nepal of 1,958 -- provided Sunday by Laxmi Prasad Dhakal, an official at the Ministry of Home Affairs -- is expected to rise as the full extent of the damage emerges.

The loss of life reported so far \"is really based on the information we have from the main cities,\" Lex Kassenberg, Nepal country director for CARE International, told CNN. \"But if you look at the spread of the earthquake, a lot of the rural areas have been hit as well. The information we received from the field is that 80% of the houses in these rural areas have been destroyed.\"

The overall death toll from the quake, including the 34 people killed in India and 13 killed in China, now stands at more than 2,000.

Looking for missing loved ones in Nepal? CNN iReport wants to help

In Nepal, more than 4,600 people have been injured. Many residents of Kathmandu, which sits in a valley surrounded by Himalayan mountains, huddled outside in cold rain Saturday night as aftershocks continued.

Fears over damage in remote areas

News out of remote areas near the quake's epicenter, where many more may have died, has been scant. Most of the homes in the secluded Latang Valley, have been destroyed, an official there said.

In accessible cities, many hills of rubble have yet to reveal all the bodies of people who were inside the buildings when they collapsed.

Nepal sits in a seismically active zone where two tectonic plates are converging. Its citizens are used to earthquakes, but not ones like this.

The quake Saturday was the strongest in the region in more than 80 years. An 8.1 magnitude earthquake centered near Mount Everest in 1934 killed more than 10,000 people.

An estimated 4.6 million people in the region were exposed to tremors from the Nepal earthquake, the United Nations Office for the Coordination of Humanitarian Affairs said via Twitter. Thirty out of 75 Nepal districts were affected by the quake.

Siobhan Heanue, a reporter with ABC News Australia, told CNN she was wandering around an ancient temple complex at the moment of the earthquake. Several temples collapsed around her, she said.

\"It's not too often you find yourself in a situation where you have to run for your life,\" Heanue said, adding that she sought shelter under the table of a cafe. \"It was utterly terrifying.\"

Temples collapse around her

Heanue watched as residents picked through the rubble of a destroyed temple, turning up bodies.

\"Unfortunately, that search was not fruitful,\" Heanue said. \"There were 12 bodies at least pulled from the rubble in the square. This was just one of several historical temple complexes severely affected by the earthquake.\"

Dharahara tower was packed with people when it collapsed. Heanue said at least 50 bodies were pulled from its ruins.

The tower, built in 1832, provided visitors with a panoramic view of the Kathmandu Valley.

Quick response needed to save lives

Aid agencies are concerned about for the welfare of survivors in the coming days, as overnight temperatures were expected to drop and people were forced to make do without electricity, running water and shelter.

The international community must react quickly to save lives -- particularly those of children -- said Devendra Tak, of the aid agency Save the Children.

\"With every minute the situation becomes worse,\" he said.

Nepal is in dire need of food, clothing and medicine.