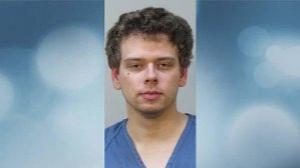 DeSpain said the shooting was targeted, and not random. Officials said the man and woman knew each other, but they are still determining what that relationship was.

No one is in custody at this time, but police are looking for 26-year-old Christopher T. O'Kroley, who is considered a person of interest. He is described as white, 6 feet tall and weighs 180 pounds. He has brown hair, blue eyes and may be wearing glasses.

O'Kroley should be considered armed and dangerous, police said. He may be driving a silver 2000 VW Jetta with a Wisconsin license plate of 720-KRW.

Police are actively searching for O'Kroley. Numerous squad cars were parked outside his home on North Thompson Drive on Wednesday morning.

A Metro Market employee said the grocery store was closing for the night as a result of the shooting, but the store reopened Wednesday morning.