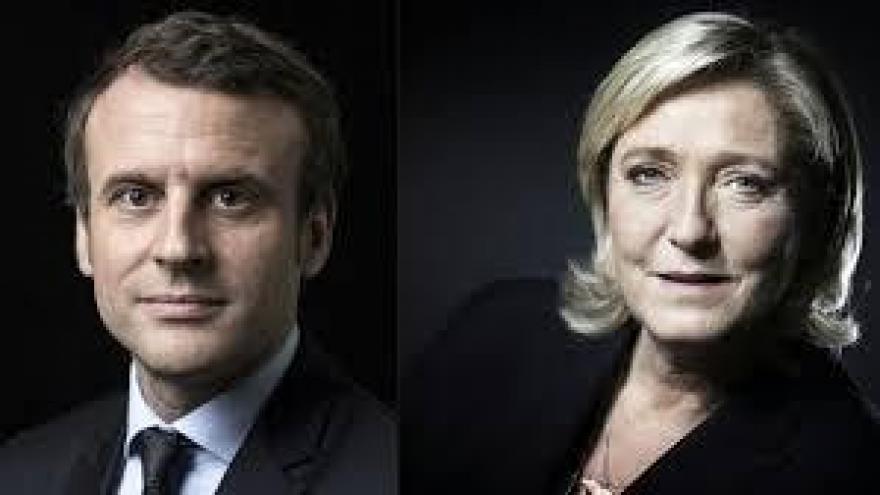 PARIS -- Centrist Emmanuel Macron and far-right populist Marine Le Pen advanced Sunday to a runoff in France’s presidential election, remaking the country’s political system and setting up a showdown over its participation in the European Union.

French politicians on the left and right immediately urged voters to block Le Pen’s path to power in the May 7 runoff, saying her virulently nationalist anti-EU and anti-immigration politics would spell disaster for France.The selection of Le Pen and Macron presented voters with the starkest possible choice between two diametrically opposed visions of the EU’s future and France’s place in it. It set up a battle between Macron’s optimistic vision of a tolerant France with open borders against Le Pen’s darker, inward-looking platform calling for closed borders, tougher security, less immigration and dropping the shared euro currency to return to the franc.

With Le Pen wanting France to leave the EU, and Macron wanting even closer cooperation between the bloc’s 28 nations, Sunday’s outcome after a wildly unpredictable and tense campaign meant the runoff will have undertones of a referendum on France’s EU membership. The absence in the runoff of candidates from either the mainstream left Socialists or the right-wing Republicans party -- the two main groups that have governed post-war France -- also marked a seismic shift in the French political landscape.

With 34 percent of the vote counted, the Interior Ministry said Sunday night that Le Pen was leading with 24.6 percent of the vote followed by Macron with 21.9 percent. The early vote count includes primarily rural constituencies that lean to the right, while urban areas that lean left are counted later.Many voters said they did not know who they would vote for until they cast their ballots, CBS News’ Elizabeth Palmer reports from Paris.

Macron, a 39-year-old investment banker, made the runoff on the back of a grassroots start-up campaign without the backing of a major political party.

Defeated conservative candidate Francois Fillon said he would vote for Macron on May 7 because Le Pen’s program “would bankrupt France” and throw the EU into chaos. He also cited the history of “violence and intolerance” of Le Pen’s far-right National Front party.   In a brief televised message less than 30 minutes after the last polling stations closed, Socialist Prime Minister Bernard Cazeneuve also urged voters to back Macron “to beat the National Front and block its funereal project of regression for France and of division of the French.”

Socialist presidential candidate Benoit Hamon, who was far behind in Sunday’s results, quickly conceded defeat. Declaring “the left is not dead!” he urged supporters to back Macron.

Voting took place amid heightened security in the first election under France’s state of emergency, which has been in place since gun-and-bomb attacks in Paris in 2015.

Mathilde Jullien, 23, said she is convinced Macron will be able to win over Le Pen and become France’s next president.

“He represents France’s future, a future within Europe,” she said. “He will win because he is able to unite people from the right and the left against the threat of the National Front and he proposes real solutions for France’s economy.” Unemployment was at the top of many French voters’ concerns this election -- and especially among voters of La Pen.

Le Pen supporters were equally enthusiastic. With a broad smile, Le Pen stood before an adoring crowd, said her National Front party will represent “the great alternative” to the French people and pledged to open a “much-needed” debate on globalization.

“We will win!” Le Pen supporters chanted in her election day headquarters in the northern French town of Henin-Beaumont. They burst into a rendition of the French national anthem, and waved French flags and blue flags with “Marine President” inscribed on them.

Like President Trump, Le Pen talks about patriotism, cracking down on immigration and bringing back blue-collar jobs. But there’s a big difference: Le Pen’s main base is among the young.

Sylvain Hechon is 25 years old -- an activist in the town of Maubeuge, a National Front stronghold. CBS News visited Hechon the day before the recent Paris shooting, when he, like millions of young French people, were preoccupied with France’s economic woes. He showed us one of Le Pen’s videos aimed squarely at millennials who face an unemployment rate stuck at nearly 25 percent.

“Why are young people attracted to the National Front?” CBS News asked him.

“Young people believe that immigrants are stealing jobs our jobs,” he said. “Marine Le Pen will limit immigration even if she has to use the military.” Pictures of waves of migrants coming ashore on European beaches resonate powerfully in the north of France, where the landscape is dotted with shuttered factories. And all that’s left of the coal mines that once employed thousands are old slag heaps covered with grass.

In the market town of Valencienne, Venus Beaudechon was out spreading Le Pen’s anti-free trade message.

“President Trump put his people first,” she said, “and we believe Le Pen would do that too -- defend the French.”

Le Pen’s supporters believe passionately both in her and her agenda. But overall she remains a controversial figure.