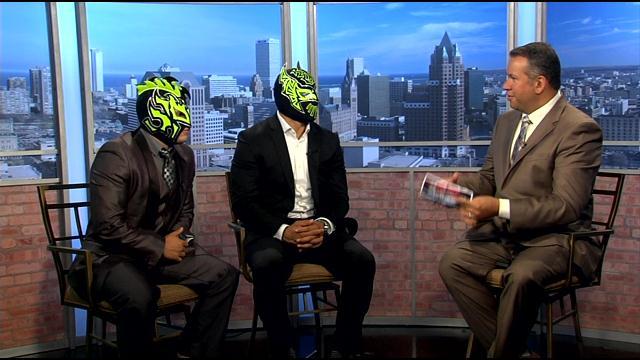 The WWE was in Milwaukee last night for the WWE Smackdown Show.

Major names from the wrestling world, including the Lucha Dragons were in attendance.

The Lucha Dragons stopped by CBS 58, before the show, to discuss wrestling.

\"You two are a duo that we'll get a chance to see tonight. You know a little bit about Milwaukee, and we'll start with you, Sin Cara, what do you think about this city, it's fan base, and it's love for wrestling,\" asked CBS 58's Kevin Holden,

\"Obviously it's a city where they love wrestling, they love WWE. To be here is an honor. It's great to come back to Wisconsin. Actually my high school coach in wrestling, he's from Dodgeville Wisconsin and he lives in Milwaukee. Hopefully I get a chance to say hi to him tonight,\" said
Sin Cara.

\"Reading your bios, talking about what you guys have done in Mexico before coming to the US. How did that prepare you to come to WWE,\" Holden asked.

\"Lucha libre is an art, and right now, lucha libre is universal. It preapred me a lot. We have a lot in common, me and Sin Cara. Ever since I started in XT, there was a different atmosphere, a different style, but lucha libre did help a lot. It helped us so much because we're both athletic and we're both high flyers. And we display a different art in the ring,\" said Kalisto.