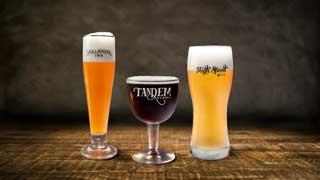 Coinciding with the launch of the Collaborative is the launch of a new bier called Hollander IPA, a collaboration with Brouwerij The Musketeers, in Ursel, Belgium. Hollander IPA is a true world traveler, made with American hops, but brewed in Belgium and available exclusively at the Lowlands U.S. Grand Cafés.

“We’re excited about this IPA,” says Emily Erler, Bierklasse Director at Lowlands Group. “Musketeers chose a Citra hop, which appeals to American hop-heads, but also allows the complex Belgian malt profile that they’re known for to shine through.”

“Our goal is to work with the best breweries in the world and we’re lucky that some of them are right here in Wisconsin,” says Herwig. “Central Waters is making really great bier right now and we have some amazing releases planned with them in the near future.”