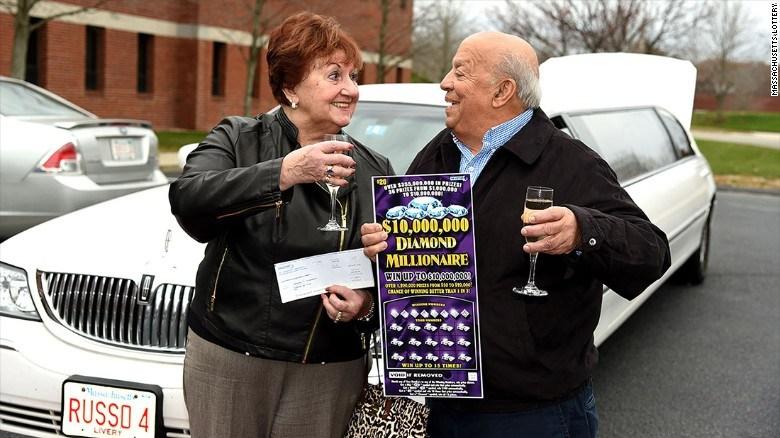 (CNN MONEY) Some people have all the luck, like the lottery player in Massachusetts who just won $1 million -- for the second time.

"She plans on using her winnings to make this Christmas an especially good one for her family," said the Massachusetts Lottery, which released a photo of Carpenito with her husband Ed toasting champagne in front of a stretch limousine.

That's not all. According to the Massachusetts Lottery, she's actually won three times at that Boston-area grocery store. In addition to her two million dollar jackpots, she once won $20,000 there.

"There's no reason to believe that this is anything other than a coincidence," said Massachusetts Lottery spokesman Christian Teja. He said that the instant tickets are randomly sent to 7,500 retailers across the state.

"The Lottery does not know where the grand prize tickets are sent to," he said. "There are numerous policies and procedures in place with all of our games to ensure that the security and integrity of these games are not compromised at any level."

According to CNNMoney math, her odds for winning both were 1 in 2.6 trillion.

The Carpenitos did not immediate return a phone message from CNNMoney.