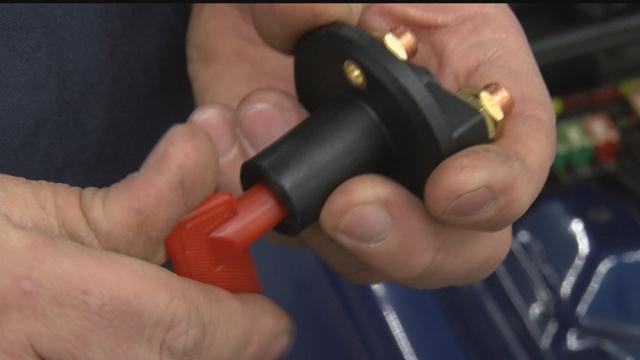 Popping the hood of his jeep is something Frank Giuffre doesn't mind doing at least twice a day.

"It blends into the engine compartment," he said.

He's talking about a red key, that turned on starts his car. But when it's turned off, it's dead.

It's called a battery kill switch. The device connects to a car battery and cuts off power when the key has disabled it. Car thieves trying to do a fast job don't have time to figure out what's wrong and will leave the car alone.

"In some ways it's better than an alarm," Giuffre said. "Some brazen crooks can get it started when your alarm is going off."

Eli Corona owns The Family Mechanic. He's installed a dozen of the devices in the last few months for concerned neighbors looking for a cheap, easy way avoid becoming a victim.

The device can be installed under the hood or inside your car, disguised from the naked eye, like the cruise control switch.

Corona said installation ranges from $75 to $150. But for Giuffre, it's a small price to pay for peace of mind.

"It's a nice feeling when I turn that switch close the hood and walk away knowing that nobody's going to get the car," he said.

The device is available at local auto parts stores and can cost as little as $20.

Corona said it's even possible to install it on your own. Newer model cars may not need the device, so check with the experts before you move forward.

The battery kill switch also has another function. It stops a battery from draining when a car is in storage.