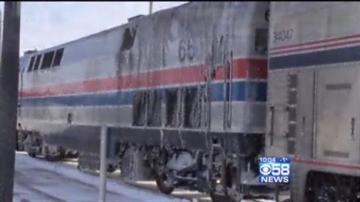 FOX POINT-A local mom waiting for the return of her teenager who is one of hundreds stuck on Amtrak trains stopped in their tracks by drifting snow.

Havens says it's been a real struggle tracking her son's whereabouts. When his cell phone is charged he checks in.

He left Ohio late Sunday night and got stuck near Indianapolis.

His was one of several trains that were apparently blocked by drifting snow.

Amtrak canceled half of its Milwaukee to Chicago routes Tuesday.

Hundreds of passengers stuck in Illinois were taken by bus to Chicago Tuesday morning.

As for Havens' son, Benjamin, his return is still up in the air.

Benjamin told his mother there was heat and food on the train. At last report, he was taken to a hotel.

How exactly and when he's getting back to the Milwaukee area is still unclear.