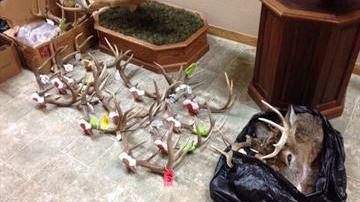 BROOKFIELD -- Another gun-deer season is in the books.  The season got off to a slow start last weekend with cold temperatures.

It's been a slow start for busniesses that rely on the gun hunt.  It's been an average year for WW Custom Taxidermy in Brookfield. They tagged their 96th deer for the gun-deer season on Sunday.

\"This is where we take in the bulk of our work,\" owner Kim Spiel said.

Spiel has been doing taxidermy for more than 25 years.  Last weekend's weather  slowed business so far.

\"Been a little bit slow this year. Just basically because of the cold first weekend that we had.\"

The Wisconsin DNR sold nearly 616,000 gun deer licenses this year - that's up from last year.  The DNR acknowledged the first weekend struggles - nearly 111,000 deer were killed and registered - that was down nearly 18 percent from 2012.

\"A lot of guys didn't sit in their stands quite as long this year,\" Spiel said.  \"They ended up getting down so a lot of the deer weren't shot.  But it is warmer this weekend so we're hoping that causes a jump next week.\"

Spiel says it'll be hard to top last year's output when more than 225 deer came through.

\"What they're bringing in is mostly what they saw. They saw the one buck, they shot it, they were done.\"

She has customers bringing deer from all across the state.   A sixteen point buck from washington county was dropped off sunday.  There was also a buck shot in chippewa county that was dropped off.  Spiel says early in the year the deer were smaller but it paid for some hunters to wait.

\"Now a lot of the really nice ones are coming in. It's nice when you see those.\"

Spiel says this is the busiest time of year for her business - even if it's below average so far - that's why  she plans for all the variables.

\"The season, the weather, the hunters, there's just so many variables so some years not as much as others.\"