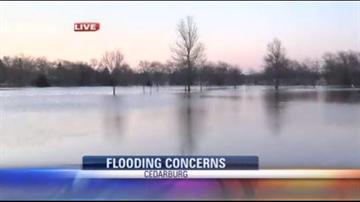 SAUKVILLE -- The heavy rainfall has ended, but flood risks continue to rise as two local rivers exceed their flood stage.

The Fox River near New Muenster in Kenosha County reached 10.61 feet around 5 a.m. Tuesday, exceeding its flood stage of 10 feet, according to the National Weather Service.

The river is expected to reach 11.6 feet by Wednesday morning, resulting in minor flooding in the area.

In Ozaukee County near Cedarburg, residents are keeping an eye on the Milwaukee River, which reached 11.37 feet at 2:15 a.m. Tuesday, just above its flood stage of 11 feet.

Forecasts show the river will reach 12.3 feet by 7 p.m. Tuesday.

At that level, flood waters will spread into the backyards of homes in the Theinsville area, an unpleasant repeat of flooding that happened in the village around this time last year.

In Saukville, north of Cedarburg, the Milwaukee River reached 13.12 feet, nearing its flood stage of 13.5 feet.

CBS 58's Marshanna Hester is live from Saukville with what residents and authorities are doing ahead of the flood threat.