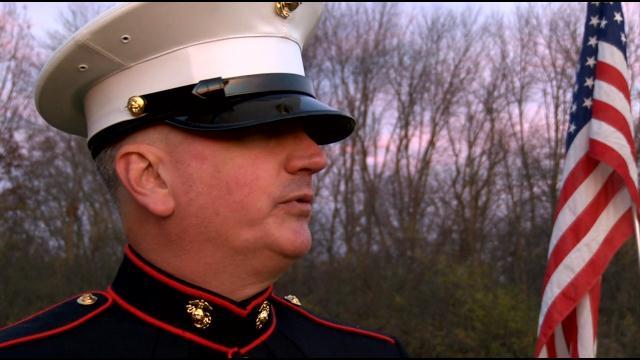 On the eve of Veterans Day, one local veteran is taking the fight over a proposed memorial to honor Greendale veterans into his own hands.

\"Every one of these flags represents one of my fallen brothers,\" said the Marine Corporal, who served in Operation Desert Storm, \"and I just figured, you know what, today is the Marine Corps' birthday, I'm going to spend it with them.\"

The corporal, a Greendale native, who served during Operation Desert Storm, stood guard Monday over a make shift memorial across the street from Greendale High School.

\"I wanted to come out here, just to draw some attention to the cause,\" he said, \"to get things rolling, to try to get this done.\"

The corporal did not want to give his name.

\"I want the focus to be on the memorial itself,\" he said.

Dressed in his formal marine uniform, the corporal kept watch over the field of flags from sunrise to sunset.

\"Once a Marine, always a Marine,\" said Fred Domagalski.

Domagalski is one of many visitors who stopped by, thanking the corporal for his service.  Domagalski also served in the US Marine Corps during the Vietnam War from 1966-1968.

\"You see a brother,\" said Domagalski.

Some visitors, like Domagalski, were puzzled as to why the Greendale Public Schools' Board of Education would vote against building a memorial to salute local veterans on the site across the street from the high school.

\"I don't see why they can't have this, it would be an honor, to put a memorial here,\" said Domagalski.

Joe Crapitto, President of the Board of Education said in a statement: \"The board's key concerns related to safety and accessibility of that location.  We continue to support the project and the Veterans' Memorial Committee's efforts.

\"It's just a shame that three people out of 16,000, can stop something like this from happening,\" said the corporal.

The corporal says on the eve of Veterans Day, he feels it's time to take a stand and tell the school board what this memorial means to his community.

The Greendale School Board is searching for another site to build the veterans memorial.