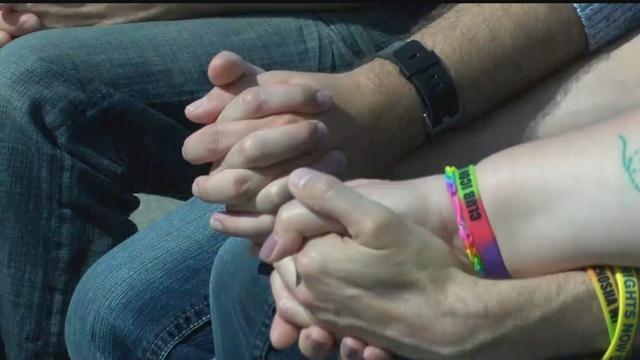 As Milwaukee Pridefest celebrated it's last day, the overnight mass shooting in Orlando was on the minds of many. Eric Heinritz was one of them.

"Throughout the festival today, you will be hearing about Orlando. We will be memorializing at several stages," said Heinritz, the Executive Director of Milwaukee Pridefest.

At 4 p.m. those inside the festival gathered for a moment of silence. There was also a tribute and prayer for the victims.

There was another change on the grounds following the shooting. The staff installed metal detectors outside the gates.

Heinritz says the goal of Pridefest has always been celebrating in a safe environment. The metal detectors were added as an extra precaution. The festival also routinely has bag checks, and only allows people in through one entrance for safety..

"In the LGBTQ community a lot of people are feeling that this is a hate crime. It feels that way... We want to make sure everyone understands this is a safe place to be," said Heinritz

The Milwaukee Muslim community is also reacting to the Orlando attack.

"My condolences go out to the families and victims... and it's the sorrow for the loss of life," said Rizwan Ahmad, a spokesperson for Ahmadiyya Muslim Community.

Ahmadiyya Muslim Community is the nation's largest and oldest Muslim organization. Ahmad says the organization has joined the fight with President Obama called "True Islam" which works to help fight extremism. He says their goal is to teach people outside the Muslim community about their religion. trueislam.com has eleven points that show how extremists give inconsistent messages with the teaching of Islam.

Ahmad said people jumped to the conclusion the shooting was terrorist driven when the shooter was identified Islamic. While the FBI has mentioned some ties to terrorism and ISIS regarding the mass shooter in Orlando, Ahmad says a distinction should be made.

"Even the own shooter's father says this has no root in religion. there's no where in the religion of Islam where it condones any activity, any vigilantism. every life is just as sacred as any other life," said Ahmad.

In the wake of the tragedy, Ahmad hopes people understand terrorism and religion are not affiliated.

"ISIS is a terroristic organization, not an Islamic organization. Many of the fathers of ISIS may profess to be Islamic. However, by their actions they are not true Muslims," said Ahmad.