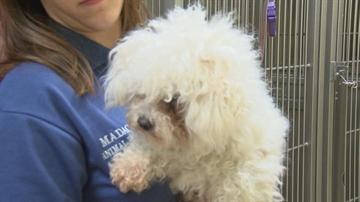 MILWAUKEE -- Stray pets roam Milwaukee all the time. The numbers increase significantly in the summer. That's when animal control starts to get overrun. For years, that meant space had to be created by putting animals down. Now there's a lifesaving service available to help keep animals alive by simply moving them to another home.

Milwaukee Area Domestic Animal Control Commission or MADACC takes in around 13,000 animals a year. But it isn't set up for true adoption.

\"Every kennel space is life for an animal, and if that space isn't here, we can't save them,\" Sparapani said.

So instead of putting animals down, a group stepped up: BRATS.

\"Our transfers have been increasing every single month,\" Sparapani said.

It's Badger Rescue Animal Transport Services - It has helped transfer more than 10,000 animals to other facilities in Wisconsin since 2008.

It started with kennels in Northern and Western Wisconsin - now it's statewide. Space was limited - so was the number of people in line to adopt. So animals were put down.

\"A lot of dogs their work making it out alive simply because they didn't have the adoption base,\" Mitchell said.

In Milwaukee, MADACC would be in the same situation without BRATS. It can't keep dogs more than seven days, so getting animals moved helps.

One took a ride to her temporary home at the Washington County Humane Society.

\"Getting them from place to place so that they are seen and adopted as quickly as possible,\" Tina Duris from the Washington County Humane Society said.

This one won't take long. But other breeds can - so it's a lifesaver for MADACC and many animals.

\"That's our goal is to have the lowest euthanasia rates possible,\" Duris said.

\"BRATS was a game-changer for this organization,\" Sparapani said.

\"As long as an animal is friendly and healthy, they are going to be placed through our facility,\" Duris said.

BRATS is always looking for volunteer drivers or help with gas cards to make travel easier.