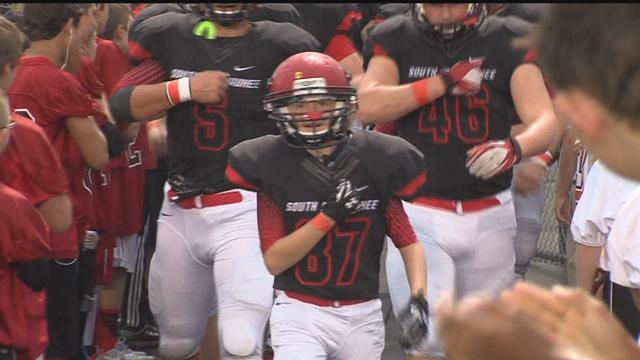 Under the Friday night lights in South Milwaukee, No. 87 stands out.

Jordan Lampton, 16, has cancer. The off-the-field battle since 2013 has kept him on the sidelines because he can't have contact.

\"With him continually being on steroids his bones are a little too brittle,\" said mom Jonelle Schroeder.

But Coach Derek Hoff has made Jordan feel apart of the team. He goes to practice and travels to games.

\"If we can take Jordan's heart and put it in the other 70 guys, we would be unstoppable,\" he said.

But the wide receiver wished for more.

\"Football is my life,\" said Jordan. My teammates are my brothers. I just want to be on the field with them.\"

Friday night was that chance. He toed the line of scrimmage for the first offensive play of the game. It was a run option, opposite Jordan.

Coach Hoff coordinated the plan with the opponent's head coach, who is his best friend and former college teammate.

\"No matter the outcome of the game, he's gonna be an example,\" said coach. \"We should all feel like winners tonight with team Jordan.\"

\"I just wanna say thank you so much for letting me do this,\" Jordan said to Coach Hoff.

\"It's heartwarming, knowing he's come this far,\" Schroeder said. \"When he's able to get back on the field, watch out South Milwaukee because you're gonna have a little weapon on your hands.\"

Jordan's chemo treatments end soon and if there are no signs of cancer, his parents hope he can take the football field, full time, next season.