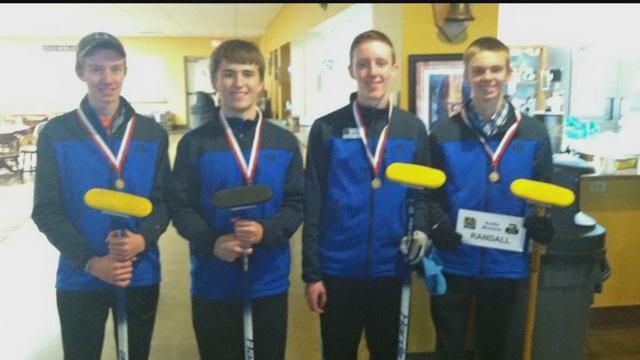 They are a determined group of men who love curling and kind of just found each other in what has become a winning season.

Team Randall has been nicknamed Winesota after their recent win at a regional competition in Madison.

The nickname reflects the far corners of the region all four men have traveled to be together and play the sport in which they have excelled.

As leader Ben Randall explained, it's not hard finding people who like curling in Wisconsin. But finding the kind of players who will commit the time it takes to be good is quite another thing.

Through social media and a camp earlier this summer he found his teammates Nathan Van Eeckhout, Joey Kropidlowski and Austin Bengston.

Curling players slide stones on a sheet of ice towards a target area which is divides into four concentric circles.

Many compared it to shuffleboard.

Two teams take turns sliding the polished granite stone to earn the highest score based on how close the stones come to rest near the target.

Team Randall says it's not just the love of the sport but the friendships that are formed.

They tell CBS 58 News that often after competition players, even from opposing teams, will gather and share a meal and a couple of laughs.

Team Randall was a special guest Tuesday on the CBS 58 News at 4 p.m.

The interview is attached to this story.