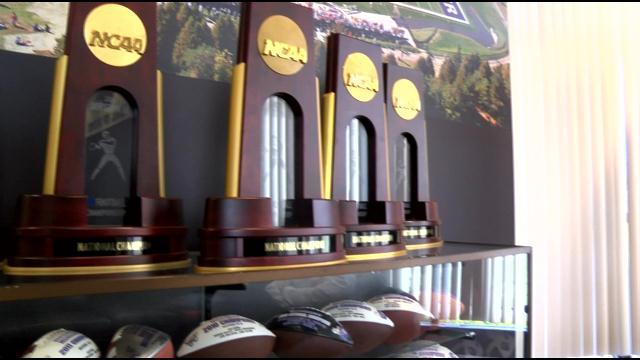 The UW-Whitewater football team has won a lot of division three National championships in recent years.

Now, the program is getting some well-deserved national recognition on their homecoming weekend.

The UW-Whitewater football program is building a legacy under head coach Lance Leipold.

Since he took the job in 2007, the team has won five Division three National championships.

The powerful program will be featured during a segment on E-S-P-N'S \"college game day\" Saturday morning.

Coach Leipold holds a number of quarterback records at UW-Whitewater.

\"I'm fortunate to have two degrees from here. It's been a lot for my family, said Coach Leipold. My parents went here. But the opportunity to be the head coach has been a dream come true.\"

The team's two running backs, Ryan Givens and Jordan Ratliffe were both born and raised in Milwaukee.

\"It feels good to play for a pretty prolific program like this coming from Milwaukee, said Ryan Givens. It feels good.\"

Ryan givens is fast, and Jordan Ratliffe is powerful.

\"It's a great balance, said Jordan Ratliffe. It's like lightning and thunder.\"

The excitement isn't only at Perkins Stadium where the Warhawks play, but throughout campus, and the town of UW-Whitewater.

Daniel Schoettler, a senior at UW-Whitewater believes Division three athletics are underrated, and the national recognition is long overdue.

\"It's great for the program to get some exposure for the university, said Daniel Schoettler. There are people who forget about division three a little bit because, just because it's division three, it's not impressive. It's impressive!\"

In 2013, UW-Whitewater made history by winning national championships for basketball, baseball, and football.