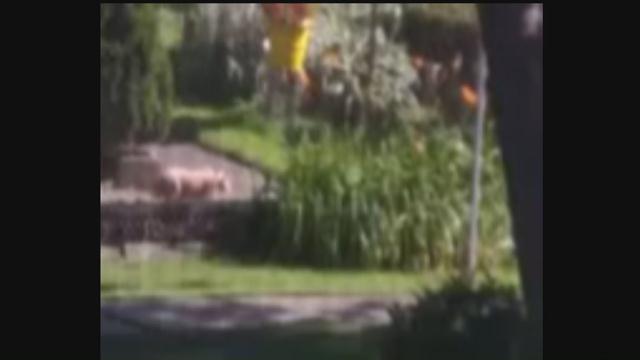 MILWAUKEE-- A serious warning from Milwaukee Police has social media roaring after reports of a mountain lion sighting in the city. #LIONWATCH and #MKELion became top trending topics in the metro after the reports surfaced Tuesday.

Cell phone video from a resident in Milwaukee's Brewers Hill neighborhood shows what appears to be a big cat roaming through someone's backyard. The person who shot the video told CBS-58 a DNR official confirmed to them the big cat they saw was a mountain lion.

Several community groups and public agencies tweeted about the so-called \"Milwaukee Lion,\" including the Milwaukee Bucks. The local NBA franchise tweeted-- \"Don't worry Milwaukee!! We're dispatching our best guy to investigate the #MKELion...\" The tweet included a picture of the team's mascot, Bango, dressed up for a day of lion hunting in the streets of Milwaukee.

Visit Milwaukee also chimed in on Twitter with their own photo of a \"lion sighting.\"  They tweeted-- \"#MKELION livin it up on Old World Third St... Must be headed to @MadersWI.\" The picture showed Simba, Pumbaa, and Timon from Disney's \"The Lion King,\" walking past Milwaukee's Brat House.

A restaurant in Bayview had perhaps, a less welcoming message for the Milwaukee visitor. The Vanguard, a restaurant specializing in house made sausages tweeted-- \"NOW SERVING LION SAUSAGE???\"

The Vanguard's message did not sit well with the so-called \"@milwaukee_lion\" on Twitter, who responded-- \"OMG GUYS WAY TO MAKE A VISITOR FEEL WELCOME.\"

Milwaukee Police say mountain lion sightings are rare in Milwaukee, but possible, which is why authorities want everyone to be careful.

\"Do not approach it, do not panic,\" said Scott Diehl, with the Wildlife Rehabilitation Center, \"if the animal is close to you, maybe 50-yards or so, don't take your eyes off it, don't turn your back, on it, remain facing it at all times, make yourself look big.\"

And what ever you do... try not to make any references to Disney's \"Lion King.\" When CBS-58's Jessica Tighe tweeted this morning-- \"Authorities are taking it seriously-- a mountain #lion sighting in #Milwaukee. Find out what to do if you see one. @CBS58 Morning News,\" @milwaukee_lion responded-- \"Tell them not to sing circle of life I'm really tired of that thank you.\"

By Wednesday afternoon Council Member Milele Coggs was concerned the good fun might be undermining the potential danger. She issued a statement that said:

\"The sighting and recorded video footage of a large cat in the Brewers Hill neighborhood in the 6th District on Sunday has become national news and is now daily fodder on social media and in neighborhood conversations across the city.

The case is being handled by Milwaukee police and is still active – the sighting has not been cleared and the information provided by witnesses has not been determined to be unfounded.

I urge my constituents and residents of the area to be cautious and aware of your surroundings at all times. Children and pets should be monitored closely when outdoors.

The joking social media posts have been entertaining during these past few days, but again I urge caution until police are able to clear the case.

Please call 9-1-1 immediately if you see the animal.\"