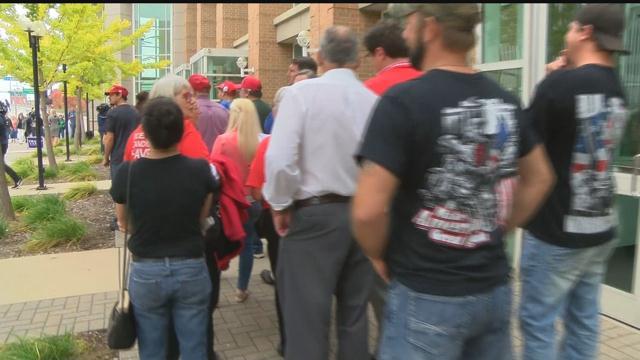 For days now he's been on the campaign trail talking about a rigged election.

Most think Donald Trump will not change his tune when he comes to rally support in Green Bay tonight.

Congressman Paul Ryan, Governor Scott Walker and Senator Ron Johnson will not be in attendance.

You can see Donald Trump is still drumming up enthusiasm some from supporters here in Green Bay.

Many lined up outside the convention center hours before the doors opened this afternoon.

Supporters I talked to say they're frustrated with Republican leaders who are not here today, also with media coverage of polls that show trump trailing Hillary Clinton in Wisconsin.

Some are echoing Trump's recent comments that this election is rigged.

"I think it's a big distraction. I think it's all set up, and start to come out that things are made up,” said a Trump supporter.

CBS 58 only spotted a few anti-trump protesters across the street this afternoon.