Limo crash victims include sisters, a teacher and newlyweds 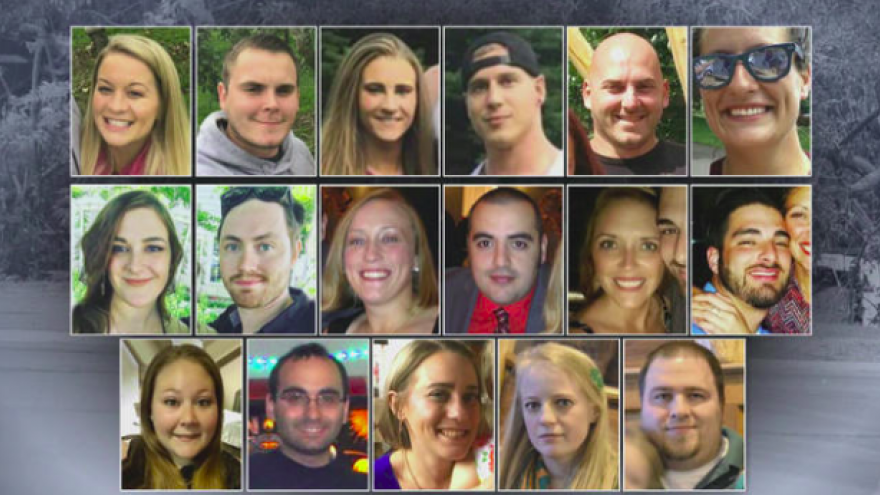 SCHOHARIE, N.Y. -- A weightlifter with a heart of gold, a teacher who wanted better lives for her students, and newlyweds who held the world in their hands are among the 20 people who died in Saturday's limousine crash in upstate New York.

Seventeen of those who died had gathered for Amy Steenburg's 30th birthday and were headed to a brewery in Cooperstown, CBS News' Tony Dokoupil reports. In the vehicle with Steenburg were her husband of four months, her three sisters and two of their husbands, and her brother-in-law. Also in the group were newlyweds Erin and Shane McGowan.

A vigil was held for all the victims Monday night in Amsterdam, New York, about 15 miles north of the crash site. Thousands of people stood shoulder-to-shoulder in a park. Candlelight illuminated a sea of solemn faces.

At least six children lost at least one, or both, of their parents in the crash.

What is known about the victims who have been identified so far:

Amy and Axel married in June and traveled extensively in recent months, according to their Facebook pages. The couple lived in Amsterdam with their dog.

Amy, a nurse, was one of the four sisters killed the crash. In her final Facebook post, Amy wrote that loved her husband "more than words can say."

"You are such an amazing man and entertain all my crazy ideas," she wrote. "Even when I move a couch just to move it back to the original place."

Steenburg worked for GlobalFoundries, a semiconductor and manufacturing company. He died along with his brother, Axel.

The New York Times reported that he was survived by a 10-year-old daughter and 14-year-old stepson.

"The entire GF community is extremely saddened by this incident and we are working closely with the families to provide comprehensive support," Laura Kelly, the company's vice president of global communications, said in a statement.

Coons, of Johnstown, was a weightlifting aficionado described by relatives as a gentleman with a dry wit.

"He had a huge heart, a golden heart," said his aunt, Suzanne Douglass. "He made you laugh so hard until you cried."

Coons lived with Bursese, his girlfriend, and a sister who has two daughters, his nieces.

"He will be sorely missed by his sister and her children," Douglass said. "He made their life very joyful with his very sweet disposition. He also financially supported the household and was also a father figure to his much younger brother."

Halse, 26, a waitress in Watervliet, was in the limousine with Cushing, her boyfriend, who worked in the technology office of New York's Senate.

Known as "Cush," Cushing also played for Team USA Dodgeball. "Cushing's unconditional kindness and ability to make friends of his fiercest competitors made him the consummate sportsman all dodgeballers strive to be," his team wrote in a Facebook post.

Halse's sister, Karina, who visited the crash site Monday, said Cushing and Halse were like "two peas in a pod."

"My sister was a very strong and independent person," Karina Halse said. "She didn't like it when other people did things for her. She would be the one to initiate things."

"I feel like my heart is sunken. It's in a place where I've never felt this type of pain before," Karina Halse said. The sisters had been texting on Saturday as Amanda Halse got into the limo to head to the birthday party. Before Amanda Halse received her sister's reply, she died in the crash.

Mary Dyson died in Saturday's crash along with her husband, Rob. She was one of the four sisters killed.

The Dysons lived in Watertown, New York, where Mary worked as an engineer and a coach at Star Spangled Crossfit, which dedicated a workout to her on Monday.

An Army veteran, Mary Dyson worked for Upstate Construction Services and was vice president of Theta Phi Alpha sorority when she was a student at Clarkson University, according to WWNY-TV.

The Jacksons left behind two daughters, Archer and Elle, ages 4 and 1. Abby Jackson, as she was known, worked as a teacher in the Greater Amsterdam School District, said her aunt, Barbara Douglas, of Dannemora.

She became a teacher because she loved working with children, Rich Peters, president of the Amsterdam Teachers Association, told the Times Union. "She wanted to help them better their lives," he said.

Adam Jackson worked as a deputy commissioner at the Montgomery County Board of Elections, according to his Facebook page. Abigail was among the four sisters killed.

King was killed in the crash along with her three sisters. A Facebook fundraiser created for her parents, Tom and Linda King, had raised more than $132,000 as of Monday evening.

Erin, 34, and Shane, 30, were married in June in upstate New York. Erin McGowan worked as an administrative assistant at St. Mary's Healthcare in Amsterdam.

She had been thinking of going back to school to become a billing administrator, said her aunt, Valerie Abeling.

"They had everything going for them," Abeling said. "She was a beautiful, sweet soul. He was, too. They were very sweet."

"They were two very young, beautiful people," said Abeling. "Everybody involved, it was horrific thing. Our lives have been changed forever."

"You're always hoping you find the love of your life, it's what you hope and wish and dream for, and they found each other," Erin McGowan's uncle Anthony Vertucci told the Times Union. "They had big plans."

Amanda Rivenburg was close to her parents and remembered by friends and coworkers for her sense of humor. She worked for seven years for Living Resources, a New York nonprofit that works with people who have disabilities, serving as assistant director of the organization's day community opportunities program.

Her colleagues came together at work on Monday to share stories about Rivenburg, a gathering that led to both tears and laughter.

"Amanda was loved by all of her coworkers," said Steve Klein, associate executive director of program services at the company. "She was passionate about her work and everyone relied on her for guidance."

Friends and family members identified Lisinicchia as the driver of the limousine on social media. His wife, Kim, posted on Facebook that "it hurts me to a core to have to bury my husband." She linked to a GoFundMe that said Lisinicchia's family "appreciates the love and support to help with his unexpected final expenses."

"The investigation is STILL going on and the facts are not verified," his niece, Courtney Lisinicchia, wrote on Facebook.

Hough, a 46-year-old assistant professor of geology at the State University of New York at Oswego, was a pedestrian killed in the crash, according Facebook posts by relatives and media reports. SUNY Oswego officials said Monday that Hough died in an accident Saturday but didn't say how he died.

The college's statement said he arrived on campus in 2016 as a visiting professor. SUNY Oswego President Deborah Stanley called Hough "a dedicated faculty member who inspired his students to learn and understand at a deep level, and whose contributions were often sought by his colleagues."

Hough is survived by his wife and their 8-year-old son, said Arta Hough, who lost a son to cancer four years ago. She described Brian as a "great father, great son."

"He loved teaching, he loved working with students," she said.

Rachael Cavosie and Michael Ukaj were also among the victims.

Contributions to this story also made by: Associated Press
Share this article:
Save with