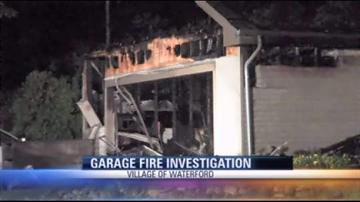 WATERFORD -- Lightning is to blame for a garage fire in Waterford Monday night.

According to the Racine County Sheriff's Office, a homeowner in the 400 block of Prairie Hill Lane heard a loud thunderclap just before midnight and went outside to check his property for damage.

He saw flames burning through the roof of his neighbor's attached garage and immediately woke the family.

By the time firefighters arrived, the garage was fully engulfed and the blaze was spreading to the home.

Waterford, Rochester and Tichigan Fire and rescue responded and contained the fire, believed to have been caused by a lightning strike.