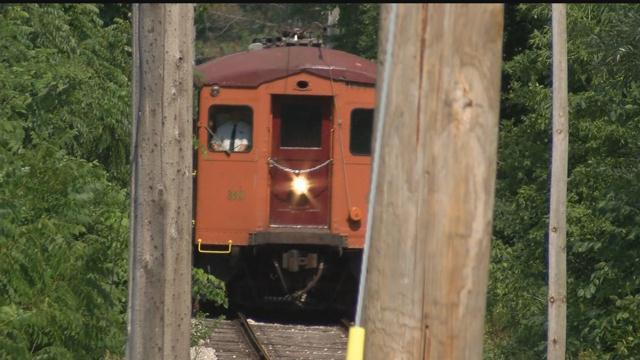 No one was injured by that lightning strike, Jonas said.

The museum's trains still ran on schedule Sunday. Jonas said they have access to 31 other pieces of equipment for rides.

But volunteers are still concerned about the antique Sheboygan interurban streetcar hit by lightning Saturday night.

"And all of a sudden I saw the brightest light I've probably ever seen in my life. And I just remember myself turning my head, closing my eyes tight, and that immediate punch of the thunder told me it was right next door," Jonas said.

"So basically our antennae for our radio repeater system was hit and if you can look on top of that tower, that was probably three to four times taller than it is now," Jonas said.

The jolt of electricity took out their phones, computer system, and a lightning arrester on their lines.

"We rely heavily on radios. And we communicate with the radios heavily. And at the time this lightning hit the tower we lost power. Fortunately we had battery back-up," Jonas said.

Jonas describes the damage to the train car as a square foot of siding blackened by the surge.

"So lightning always wants to get to ground. and so if there's a trolley pull up and the lightning is in the lines somewhere near a car - that can get into that car and ultimately it wants to get down into those rails," Jonas said.

"Damages to this car are confined to a very small space. And so it shouldn't take too much - mainly a labor of love and a lot of TLC - to get it polished up again," Jonas said.