Life in Space with Scott Kelly 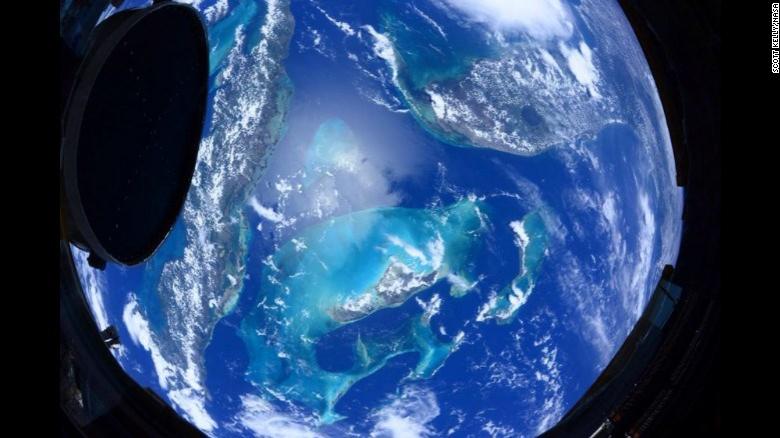 (CNN) Astronaut Scott Kelly has been back on Earth for about three weeks since completing his groundbreaking year in space and he's still adjusting to the sensation of having solid ground beneath his feet.

"The most overwhelming part of it is gravity itself and I still haven't gotten over it completely," Kelly told CNN Chief Medical Correspondent Dr. Sanjay Gupta during a live Facebook chat Monday night.

Although Kelly announced that he will be retiring from NASA, he said he is still dedicated to the formal data collection process of the Twin Study, which is an ongoing look at the effects on Kelly after a year in space, versus that of his twin brother, Mark, who remained on Earth. And while he doesn't miss living "in constant noise" with fans, pumps and motors constantly whirring in the background on the International Space Station, Kelly seems in awe of the incredible experience he was able to have in his "second home."

And the surprising thing that made the return trip home? His glasses. "These are the glasses that launched with me and I never lost them in space," Kelly said, referring to the lenses he wore during the chat. "This is more of a miracle because stuff just floats away up there."

Kelly also believes that the space station is proof that we can do anything. "That space station is such a complicated facility and was so difficult to build and such an achievement. If we put our minds to it, we can achieve anything we want, whether that's curing cancer or going to Mars, we can do it, we just have to put the resources behind it."

Kelly answered questions for nearly an hour. Here are some of them. Some of them have been edited for clarity or brevity.

How are you feeling? I felt significantly different coming back. Initially, I felt better coming out of the Soyuz. Maybe it was adrenaline or that I had experienced that once before. After that, I felt much different. My legs have had kind of a negative reaction to gravity and it's kind of shocking how for the first couple of weeks my legs were swollen, sore, the joints, my muscles, and when I stood up at night I could tell my whole cardiovascular system wasn't used to keeping the blood out of my legs. Its like when you turn upside down on the monkey bars and feel the rush of blood to your head. It was the same way with my legs and I could feel them swell up and it was kind of alarming. But I'm slowly getting better, but I still get up very slowly. I'm not really able to run yet. I think I'm already improving and will over time.

What was happening to your legs to cause you pain? Being in space for so long, your cardiovascular system doesn't have to keep the blood from pooling in your legs due to gravity when you're standing up -- that's why your head gets swollen when you're in space. Over the course of the first several months you're there, you lose fluid. Now you have gravity pushing all of that fluid back into your legs. I think the muscles in your cardiovascular system aren't able to physically adjust the pressure like they do when you live in gravity all of the time.

What are your thoughts on Mars? If you were asked to be that guy who goes to Mars, what would you say now? A couple of weeks ago, I would've said I'm not that interested in Mars, but now I am probably more interested. If we go to Mars and we land on Mars and we stay on Mars, we can experience Martian gravity and don't have an ultra-long time in microgravity, which I think is helpful. I think where we run into issues is flying around Mars and coming back, because then you have guys in space for a year and a half. I wouldn't say you can't but I would say that's pretty significant based on my experience.

My first flight was seven days, my second 13, my third 159, my fourth 340. If I had to graph how I felt, it's a linear of things. You add another couple hundred days, and if I felt 50% worse than how I feel now, that would be pretty hard to get around when I got back. There were a couple of nights there after I got back that I felt so bad that had I not spent a year in space, I would have gone to the emergency room. It was a combination of every place my skin was touching was inflamed, legs were so sore it was hard to get out of bed, and it was almost that delirious feeling you get when you have the flu, too.

What scared you the most while in space and what did you do to overcome that fear? The thing I've always feared the most is not my own personal safety but the safety of my kids, people you love on the ground and something bad happening to them and you not being able to do anything about that. I experienced that on my last flight with my sister-in-law Gabby Giffords being shot, and having had that experience once, I know how difficult it is to deal with a situation like that where no matter what, you cannot be there. There are only a handful of things that will allow you to leave the space station, and all of them have to do with the space station -- none are on Earth. It's because of a fire, depressurization or a medical emergency for one of the crew members. No matter what happens to your kids and loved ones, you are not coming home.

What is it like leaving the space station and landing on Earth? This place is your home and I respected the achievement that is the space station. When I was leaving, I knew I would most likely never see it again, so that's kind of bittersweet. Backing away in the Soyuz, I was thinking how having lived there so long, how this is the hardest thing we've ever done, it was harder than going to the moon, building this facility that has this incredible amount of potential and it really struck me, I felt privileged to be a part of it.

I've always struggled explaining how small the Soyuz is that you come back in and it dawned on me that the way I can explain it: As small as it can be, you can actually fit three people in it. It's tiny. It is the brute force method of getting back from space. You go from 17,500 mph to basically losing all of that speed in 5-10 minutes when you're bleeding all of that energy. It's like going over Niagara Falls in a barrel but while you're on fire. And when you realize it's not going to kill you, it's the most fun you've ever had.

What are the advantages to doing experiments on the space station? It's microgravity. The only way on Earth you can do is put something in a centrifuge and increase the gravity component. In microgravity, we have something we cannot do on Earth. You can do it in an airplane for 20 seconds in a parabolic flight or drop something off a tower and experience it for a short amount of time, but the environment of the space station provides the ability to change that and whether it's combustion technology or how cells might grow in a bioreactor or protein crystals, a variable that you can make nearly zero that, on Earth you don't have the capability of doing that. So you can learn different things by controlling that on the space station.

Do you get colds and flu on the ISS, or are you protected due to the isolation? A lot of people get congested, but it's not because of virus or bacteria, part of it's a fluid shift or part of it is like an allergen, but not like cold or flu. Your skin cells are floating around and other people's skin cells and we have a good ventilation system that draws that in but, on Earth you would never be breathing in someone else's skin cells that come off their body. Also the CO2 on board is 10 times higher than what it is on Earth. One of the ways myself and others react to that is some pretty significant congestion, headaches, in my case, it irritates my eyes. I wouldn't want to live forever in that kind of CO2 environment. When it gets up around 3.8 millimeters of mercury, it can affect your cognitive ability as well. It's definitely something to emphasize for future vehicles.

Mentally, how did you cope being up there so long? A year is a long time to be up there. I was lucky in that I had flown before for 159 days and knew how to pace myself. I think in some ways being the first person to spend this amount of time up there adds that excitement value. It made the time go by a little easier. In June, I had been up there for a few months, and I thought, "Wow I will be there until next March." It's hard to get your head around. It's an amazing space station, but you cannot leave. It's like being at work in the office for a really long time.

Mars or the moon? Where should we go next and why? I think there is a lot to still be learned from going to the moon and it's a great place to develop and test out your technology for going to Mars, it's almost like it's designed perfectly to do that. It's closer, it's smaller from a gravity perspective, it has no atmosphere so you don't have to deal with the issues of the Martian atmosphere. But the problem with it though is that it's expensive, and we don't have an unlimited amount of money. In a perfect world, you would use the moon as a way to test systems, technology and procedures before you go to Mars, but we have other priorities. But maybe it makes sense to the people who make these decisions that going to Mars first without going back to moon is a better way to do it.

What do you miss seeing the most from the ISS? I miss the guys I was up there with, especially the three that are up there now. As the more experienced one, you're nurturing them along, and when you leave it kind of feels like you're abandoning them. And the overall mission of doing something that is incredibly difficult and challenging. I miss looking out at the Earth but I realized I had looked out at the Earth a lot when I opened the window shade in the cupola and saw this spot of sand and I could tell just by the color and texture instantly that it was this area just north of Mogadishu in Somalia and I'm thinking, this is how you know it is time to go home.