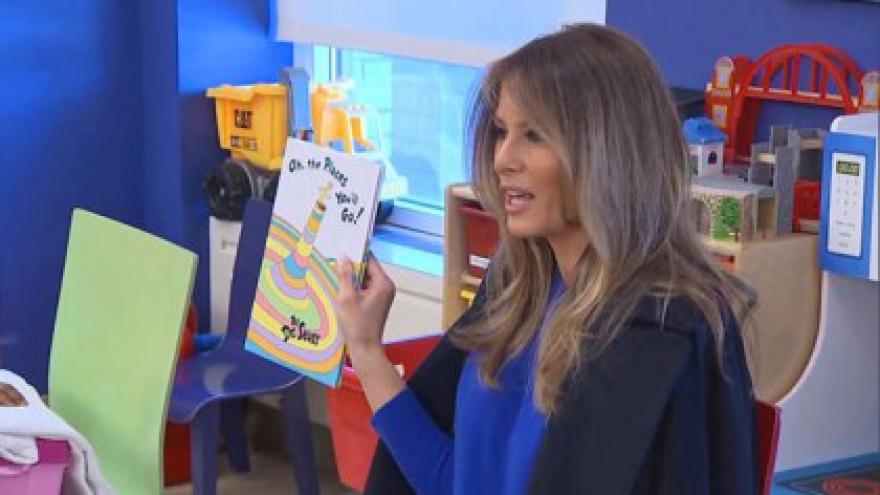 CAMBRIDGE (CBS) – The librarian at the Cambridgeport Elementary School is saying no thanks to a shipment of books from First Lady Melania Trump.

One school from each state was chosen by the White House to receive ten Dr. Seuss books as part of National Read a Book Day.

“Getting an education is perhaps the most important and wondrous opportunity of your young lives,” Mrs. Trump said in a letter to the children who will be receiving books.

The school’s librarian, Liz Phipps Soeiro, wrote a lengthy editorial for the Horn Book’s Family Reading blog explaining why her school does not need the books.

“My students have access to a school library with over nine thousand volumes and a librarian with a graduate degree in library science. Multiple studies show that schools with professionally staffed libraries improve student performance,” wrote Phipps Soeiro.

The librarian’s editorial also criticizes the First Lady’s book selections, which include The Cat in the Hat; One Fish, Two Fish, Red Fish, Blue Fish; The Foot Book; Green Eggs and Ham; and Oh, the Places You’ll Go!

“You may not be aware of this, but Dr. Seuss is a bit of a cliché, a tired and worn ambassador for children’s literature. As First Lady of the United States, you have an incredible platform with world-class resources at your fingertips.”

Parents picking their children up outside the elementary school on Wednesday were quick to support the librarian.

“That’s the librarian’s prerogative and I support her decision,” said parent Eric Munson.

“I think the letter is really articulate, constructive in its suggestions,” said parent Alex Vanpraagh.

The Cambridge School system says the opinions in the editorial do not represent the district and released a statement, which says in part:

“In this instance, the employee was not authorized to accept or reject donated books on behalf of the school or school district. We have counseled the employee on all relevant policies, including the policy against public resources being used for political purposes.”

People outside the school district around Cambridge Wednesday night were also quick to chime in.

“So I don’t have a very strong opinion, but I think it could definitely be interpreted as an insult to the First Lady,” said Elizabeth Pyjov.

“Oh well Dr. Seuss for us yeah we always used to read books as kids and have our parents read him to us. We actually had at my sister’s wedding my brother read a Dr. Seuss poem,” said Simon Tyson.