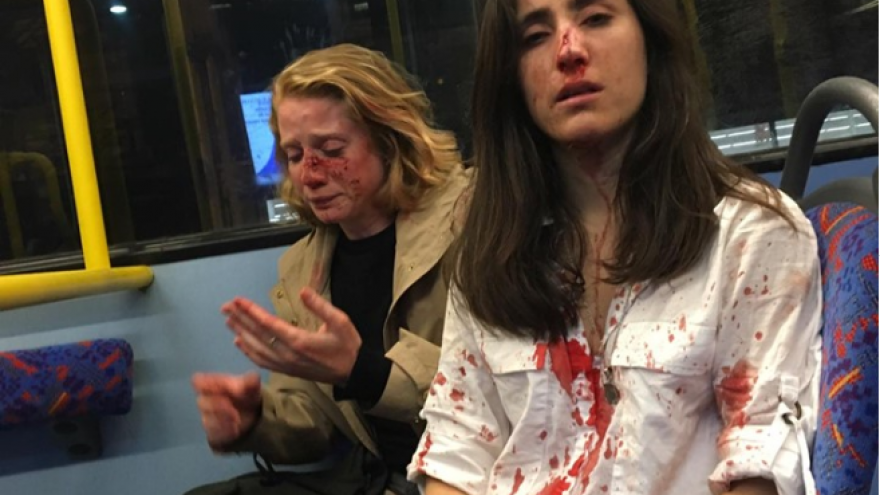 London police arrested four teenagers Friday in the "homophobic" attack on a lesbian couple who were beaten bloody on a double decker bus. One of the victims, Melania Geymonat, described her harrowing experience of last Sunday's incident on social media, saying a group of young men demanded she kiss her girlfriend, Chris, for their entertainment.

Metropolitan Police said the couple was riding on a top deck of a night bus to West Hempstead when the teens, aged 15 to 18, began to harass them with "lewd and homophobic" comments. According to Geymonat, even as the couple tried to defuse the situation, the youths attacked them anyway.

"They started behaving like hooligans, demanding that we kissed so they could enjoy watching, calling us 'lesbians' and describing sexual positions," she wrote on Facebook Wednesday. "Chris even pretended she was sick, but they kept on harassing us, throwing us coins and becoming more enthusiastic about it. The next thing I know is that Chris is in the middle of the bus fighting with them."

She added, "On an impulse, I went over there only to find her face bleeding and three of them beating her up. The next thing I know is I'm being punched." Geymonat said she became dizzy and fell back; later she realized police had arrived on the bus and she had blood all over her. A picture she uploaded with her Facebook post shows the two women sitting on the bus with bloodied faces and blood stains on their clothing.

The teens ran away, and a phone and bag were stolen during the assault, police said. Both women were taken to hospital for treatment to facial injuries and later released.

In an update on Friday, police said the four were arrested on suspicion of robbery and aggravated hate crime. They were taken to separate police stations for further questioning. Police also said they were reviewing surveillance video footage of the attack.

"Hate crimes against LGBT+ people will not be tolerated in London," he said. The @metpoliceuk are investigating. If you have any information about this call 101 to report it."

As people take part in celebrations of LGQBT rights around the world for Pride Month, Geymonat expressed disappointment in having to be in fear of being attacked for being gay.

"I'm tired of being taken as a SEXUAL OBJECT, of finding out that these situations are usual, of gay friends who were beaten up JUST BECAUSE," she said. "We have to endure verbal harassment AND CHAUVINIST, MISOGYNISTIC AND HOMOPHOBIC VIOLENCE because when you stand up for yourself sh*t like this happens. I just hope that in June, Pride Month, stuff like this can be spoken out loudly so they STOP HAPPENING!"