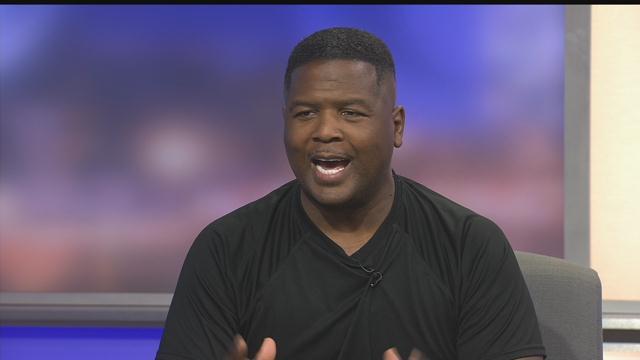 LeRoy Butler, Green Bay Packers legend and inventor of the Lambeau Leap, stopped by the CBS 58 News at 4 Tuesday to talk about the Packers draft class-- and an upcoming fundraiser where you can meet him, and bid on NFL gear.

Packers GM Ted Thompson focused on both offensive and defensive lines in the 2016 draft, something Butler sees as no accident. "If you think of the teams that are big and physical, like Seattle, you look at teams like the Dallas Cowboys, they all have great offensive and defensive lines-- you have to build the interior," Butler said, "Look at my career, it wasn't good until Reggie White got in town. So Reggie White comes in town and all of a sudden I'm all-decade, you do the math."

The Packers first-round pick, defensive tackle Kenny Clark, is a player that Butler thinks will have to step into the starting lineup right away. Especially with BJ Raji on hiatus, and Mike Pennel serving a four-game suspension. "You have to put him out there nowadays, there is a void. You have one of the guys that's going to miss four games, you also have a guy that's semi-retired, you also have a guy that you really don't know. you also have Latroy Guion. He (Clark) fits a need in the 3-4 defense. If you have a good nose tackle, now your linebackers can run sideline to sideline," Butler said.

Butler thinks the team got good value in the 3rd round. "I like Fackrell. He's an outside linebacker who can play defensive end. He gets after the quarterback, that's all he wants to do," he said.

Would you like to bid on a signed JJ Watt jersey? How about some Aaron Rodgers or Brett Favre gear? Butler knows just the place. There's a meet-and-greet to benefit St. Matthews School, May 24th at the Oak Creek Community Center from 6-8pm. For more information, or to purchase tickets go to stmattsgolfclassic.com