Leaders ask the youth to brainstorm solutions to gun crime 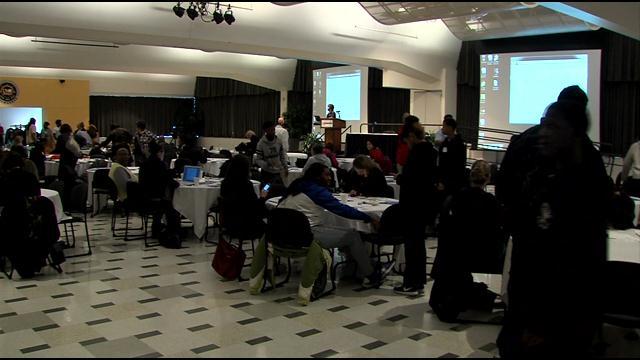 An anti gun violence summit held in Milwaukee asked the youth of  the city to help solve crime issues. Michael Murphy with Milwaukee Common Council says addressing the youth is key to changing the landscape of the city.

\"They are going to be the leaders, providing them the opportunities, to reach out to other classmates to say there is other ways, than through violence.\"

Community leaders such as Milwaukee Mayor Tom Barrett, MPS Superintendent Dr. Darienne Driver and others encourage youth to talk about their experiences with violence. Zeynab Ali is a young girl already on Milwaukee's Youth Council, and spoke at the event.

Ali says, \"Because of gun violence, not only those kids that got shot, but also creating fear amongst other kids, which lets them down in terms of reaching their potential.\"

There were also interactive workshops for adults and young people to develop action plans to prevent gun violence. Dawn Barnett, from Running Rebels says the event is so important and positive because there is already negativity on the streets.

Barnett says, \"It's not about will I hear a gun shot it's about when I'm going to hear it, and now it's to the point where kids instinctively get down.\"

It's one step to get people from all across Milwaukee talking about change.