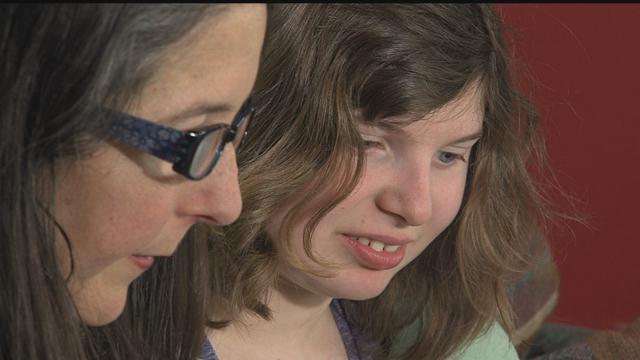 But, the attorney general has made it clear, he does not want the product manufactured in this state, leaving those who need it with no legal options.

Right now, the only way people you can legally have CBD oil in this state is if you have a prescription and are participating in a clinical trial.
When we last checked, no hospital currently has any trials and prescriptions cannot be written because they violate federal drug laws.
So while state lawmakers work, families have really only three options: move, break the law, or wait.

"A lot of our kids have had so many seizures their bodies can't function anymore. My daughter is one of them. She's probably had 10,000 seizures easily," said Jennifer Bertram.

So many that 20 year old Meghan Bertram has lost her ability to speak, completely changing the way she not only converses but interacts with others.

"When you lose your verbal speech, people treat you differently. It's unfortunate but they don't presume you know things when you don't speak its changed our whole family," said Jennifer Bertram.

Communicating the only way she can, with a spell board. Meghan spells out her message to her mom, "I want to not have anymore seizures."

The use of CBD oil, a cannabis product, would likely make a dramatic improvement in Meghan's daily life. Senator Van Wanggaard says this isn't marijuana.

"It doesn't have a high enough percentage of THC for you to give a high," said Wanggaard.

"If it was me, I'd be going to Illinois or Colorado and if I had to I'd move my family, but I think that's a lot to ask for someone who has built their life here," he said.

Exactly what the Pletka family from Milwaukee chose to do; moving to Colorado as their daughter Lily struggled with debilitating seizures.

Wanggaard's proposal would require a doctor's note instead of a prescription, but even with the note, state to state transport of the drug would still be illegal.

"I can't see that they're going to be looking at a parent who had a demonstrated medical need for their child. I can't imagine any DA prosecuting someone for doing that," he said.

Bertram says its a step in the right direction, saying everyone should be able to at least try CBD as a treatment option without living in fear.

"Families want to feel safe, be OK with trying this with the help of their health professional, talking to them and seeing if it makes a difference and if it does make a difference, not being afraid that someone's going to come out and prosecute them," said Bertram.

Wanggaard says, on a federal level, work is being done to remove CBD from the list of schedule two drugs. He says it doesn't belong there because it doesn't give you a high when you take the recommended dose, and taking it off of that list would enable people to transport the drug across state lines, back into Wisconsin.