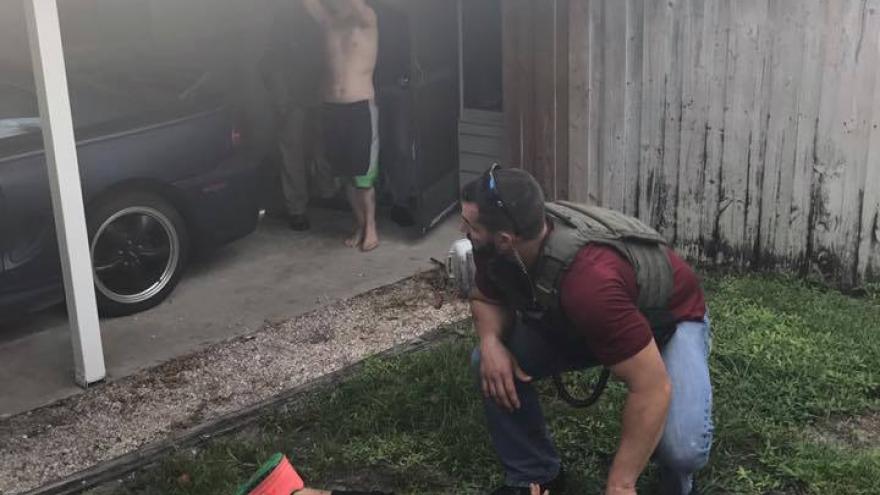 Authorities say 24-year old Brady Kilpatrick was taken down by a team of law enforcement officials at a home in Martin County, Florida, shortly after 7 p.m. Tuesday night.

The announcement was made on the Martin County Sheriff's Office Facebook page -- including a few photos from the scene.

Kilpatrick had no idea that a team of law enforcement was surrounding the community where he was trying to hide out, according to the Facebook post.

The inmate, who hails from Cordova, Alabama, had been jailed on charges of possessing marijuana and drug paraphernalia.

Earlier, an Alabama sheriff said the dozen inmates escaped from his county jail by covering up the numbers identifying an outside door with peanut butter, and then persuaded a new jail employee watching them on closed-circuit television to open it from his control booth.

"Changing numbers on doors with peanut butter -- It may sound crazy, but these kinds of people are crazy like a fox," Walker County Sheriff James Underwood told a news conference. "He thought he was opening the cell door for this man to go in his cell, but in fact he opened up the outside door."

"Escapes happen," Underwood said. "We've got some evil people down here, and they scheme all the time to con us and our employees at the jail. You've got to stay on your toes. This is one time we slipped up. I'm not going to make any excuses."

All but one of the dozen inmates were captured within hours the sheriff said. He said the only person seriously hurt in the entire escape incident was an inmate who sliced his thumb climbing over a razor-wire fence.

The fugitives -- between 18 and 30 -- face charges ranging from disorderly conduct to attempted murder.

Underwood said the escape happened about Sunday evening and he estimated inmates had cleared the barbed wire fence in less than 10 minutes.