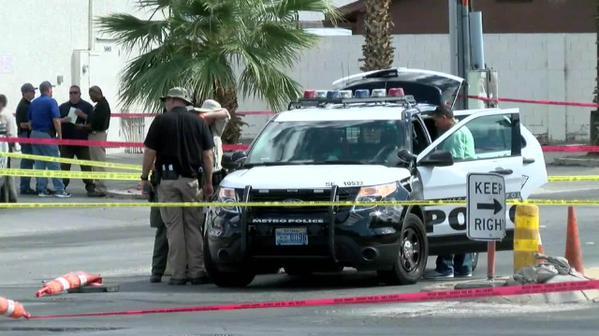 An officer who was shot in the hand was being treated at a hospital, Las Vegas Metropolitan Police Sgt. John Sheahan said. He was in good condition.

Police haven't released the identity of the suspect, who was later arrested by the officers.

The officers were in a marked patrol car, police said, responding to a disturbance call at a local business.

\"They were ambushed on the way to that call,\" Sheahan said.

Undersheriff Kevin McMahill praised the officers, saying they showed \"remarkable restraint\" when they took the suspect into custody.

\"These officers are going out there and being attacked while they are sitting in a police car, and we didn't fire a single shot back at him,\" he told CNN affiliate KSNV.

McMahill said his department has changed the way it deploys officers, sending out two-officer units \"because of the narrative of violence against police across the country.\"

\"We are certainly working on pins and needles,\" he told KSNV. \"(That is) part of the reason we doubled them up. So we have two officers available immediately whenever an incident occurs.\"