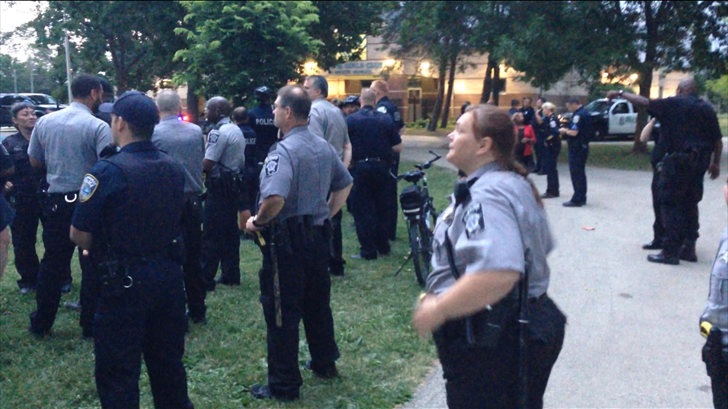 Police say a teenage boy began arguing with a Milwaukee County Sheriff's Deputy about the volume of his music. When police officers arrived to help the deputy, they say another person became physical, and was arrested. As that altercation broke out, over 30 squad cars swarmed the park from various angles.

Law enforcement officers from MPD, and Milwaukee Co. Sheriff's Department were in the area all afternoon, hoping to avoid an incident following a violent week.

Police say 4 people were arrested on Tuesday for lightning a garbage can on fire, and smashing the windshield of a squad car.

On Thursday, dozens of teenagers began gathering in the park around 5:00, as law enforcement watched nearby.

Keosha Nelson says the large police presence made her, and other teenagers, feel uncomfortable.

Sharlen Moore says she was hoping the neighborhood, not police, could take back the park.

"This is not the answer at all," she says. "If you look around you see a lot of adults that have answered the call, all it took was 'hey, our young people need us. Let's go to the park and support them."

She says parents and youth organizations will return to the park every night until the violence ends.