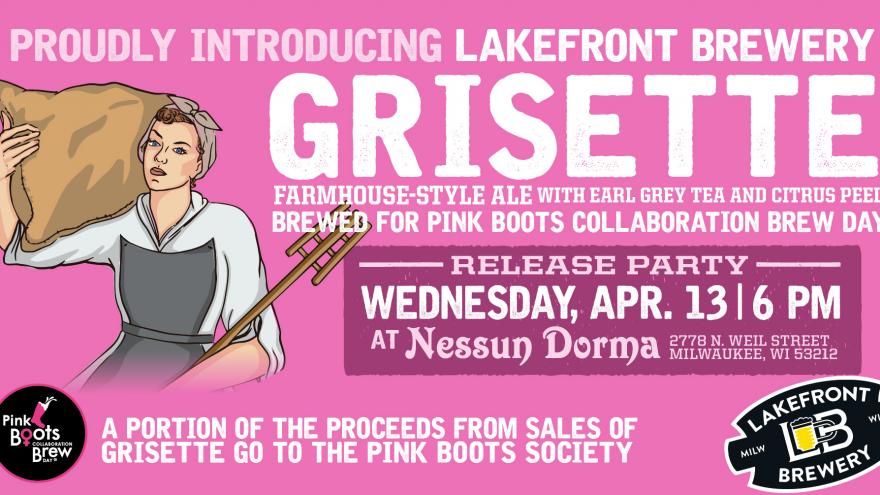 The farmhouse/table ale is called "Grisette" which means "Little Gray One," and refers to the grey aprons women serving beer would wear, or the little grey rocks that minders who drank the beer were breaking all day. Lakefront Brewery's Grisette refers to the little Earl Grey tea and Citrus Peels they used.

According to a news release, Lakefront Brewery has supported the Pink Boots Society with special beers brewed by female team members.

The Pink Boots Society was created to assist, inspire, and encourage women and/or non-binary individuals in the fermented and alcoholic beverage industry to advance their careers through education.

“This was the first year that Pink Boots Society had over 500 brews all over the world,” said Lakefront Brewery Excise Tax & Compliance Manager, Kelsey Moses. “This was a goal they had set and met, and I'm excited to be a part of it as it gets bigger and better every year!"

Grisette will be available on draft at Lakefront Brewery Beer Hall and select locations. A release party for Lakefront Brewery Grisette is set for 6 p.m. Wednesday, April 13 at Nessun Dorma, located at 2778 North Weil Street.

A portion of the proceeds will go to the Wisconsin Chapter of the Pink Boots Society.

Lakefront is donating a $1 per pint sold of the Pink Boots beer to the Wisconsin chapter of Pink Boots and also donating $30 per keg sold in the market.