K.T. Tunstall Touring Milwaukee by Bicycle Before Hitting the Stage at Summerfest 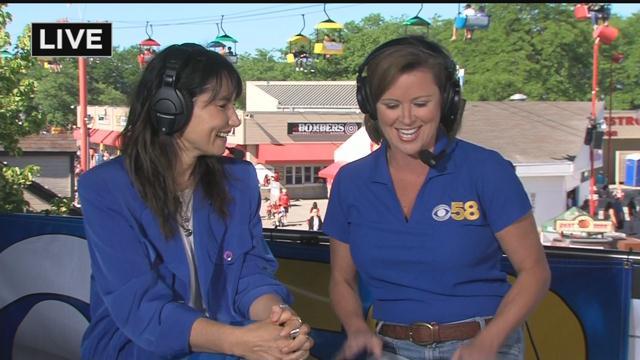 K.T. Tunstall says her new project "Golden State" is a phoenix rising from the ashes, a reflection of her getting over a lot of challenges and coming out of it knowing that it's alright to be the boss.

"Some hard stuff has on in my life," Tunstall admitted during a live interview on the CBS 58 News at 4:30. It was a reference to a divorce and the loss of a parent.

The Scotland born singer/songwriter known for guitar pop says this is a hard charging album, reflective of her time now as a resident Venice Beach, California.

It has also allowed her to appreciate all that life has to offer.

K.T. has been to Milwaukee before, but this time she and some of the crew actually got a chance bicycle around.

She also say people sing her anthem "Suddenly I See" all the time to her.

Golden State was produced by  Tony Hoffer (Beck, Fitz and The Tantrums), written by KT, and recorded in Los Angeles where she now lives.

It features three track "Evil Eye”, “All Or Nothing” and “The Healer”, with an extra slamming remix of “Evil Eye” by critically acclaimed UK band Django Django.

Old and new fans alike are guaranteed to sit up and take notice of this fresh sounding blast of rhythmic bliss.  This four track EP will be available across digital stores and streaming services.

Barnes and Noble will be the exclusive retailer to carry a CD version of the EP, which will include the aforementioned four tracks, plus an exclusive track entitled “Bad Dream”.

K.T. compares the songs to cats. “They’re really furry and sweet and then they  scratch you, and they won’t let you put a leash on them, ever.”

KT and her band are currently on the road throughout the summer, playing various festivals and theatres with a full US & UK tour to come.

If you can't catch her, you can still get your rock and roll on click here