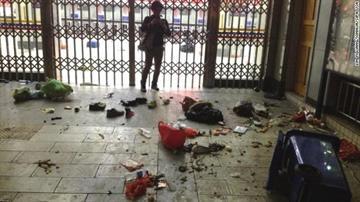 (CNN) -- Lu Haiyan said the slaughter began while she and a friend were standing in the ticket hall of a Chinese train station.

\"Suddenly, many people started running around crazily,\" she said on Tencent Weibo, a Chinese equivalent of Twitter. \"We saw two people carrying big cleavers hacking whoever is in the way. They almost got to my back. Then I lost contact with (my friend) and I saw blood splashing in front of me.\"

Twenty-nine people were killed and 130 were injured Saturday night when 10 men armed with long knives stormed the station in the southwest Chinese city of Kunming, the state news agency Xinhua reported.

Members of a separatist group from Xinjiang, in northwest China, are believed to have carried out the assault, authorities said. The report referred to them as \"terrorists.\"

Police said they killed at least four attackers and shot and wounded a female suspect. Authorities were searching for other suspects.

The killing spree came out of nowhere.

Yang Haifei, a resident of Yunnan, told Xinhua he was buying a ticket when a group of people, most of them in black, rushed into the station with knives.

\"I saw a person come straight at me with a long knife and I ran away with everyone,\" he said, adding that people who were slower were severely injured. \"They just fell on the ground.\"

He said he sustained injuries to his chest and back.

Lu Haiyan said she ran to the main road.

\"I ran to a restaurant already with a full crowd,\" she said. \"The restaurant owner shut the door for quite some time before reopening it. Both my hands and legs are shaking.\"

Xinhua quoted a 50-year-old woman whose older husband was among those killed.

\"Why are the terrorists so cruel?\" said Chen Guizhen, holding her husband's bloodied ID card.

In the aftermath, postings on Sina Weibo, another Twitter-like social medium, showed local police patrolling the station, with bodies in blood lying on the ground. Chinese state TV showed investigators putting a knife with a blade at least 2 feet long into an evidence bag.

Mass knife attacks are not unprecedented in China. Some occurred in 2010 and 2012, but the attacks happened at schools and didn't appear to have political connections.

Chinese President Xi Jinping urged law enforcement \"to investigate and solve the case and punish the terrorists in accordance with the law,\" according to Xinhua.

Xinhua said the Kunming railway station is one of the largest in southwest China.

Frequent outbreaks of violence have beset Xinjiang, a resource-rich area where the arrival of waves of Han Chinese people over the decades has fueled tensions with the Uyghurs, a Turkic-speaking, predominantly Muslim ethnic group.