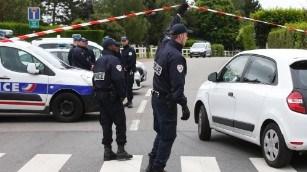 (CNN)The killer of a French police officer and his partner broadcast the scene of the attack live on Facebook Monday night local time, a French source close to the investigation told CNN.

The man who carried out the deadly knife attack in Magnanville, which is 45 kilometers (28 miles) northwest of Paris, was Larossi Abballa, the source told CNN terrorism analyst Paul Cruickshank.He stabbed the officer to death before taking the partner and their 3-year-old son hostage, French officials said.

Abballa was then killed by a SWAT team after a standoff with police.

During his live broadcast on Facebook, Abballa said he was not sure what to do with the child. Some time after, French commandos stormed the house and killed him, the source said.

The SWAT team was able to rescue the son, the French Interior Ministry said.The ISIS-linked A'maq agency reported that the killing was done by an "Islamic State fighter," although there was no direct claim of responsibility.French President Francois Hollande said the crime was "unquestionably a terrorist act," while French Interior Minister Bernard Cazeneuve described the killings as "an abject terrorist act."

Aballa was convicted in 2013 for involvement in a jihadi recruitment network that sent fighters to Pakistan. He was also suspected by French security services of having links to a recruitment network for jihadis in Syria, the source close to the investigation told CNN's Cruickshank.

According to Magnanville Mayor Michel Lebouc, Abballa grew up in nearby Mantes-la-Jolie, which has a history of radicalization in its mosques.In the video, Abballa claimed he was responding to a call from senior ISIS leader Abu Mohammed al-Adnani for the terror group's followers in Europe and the United States to carry out attacks during Ramadan.The killings come as France is on high alert for terrorist attacks as it hosts the Euro 2016 football championship, Europe's centerpiece football event.

U.S. and British officials have both warned their citizens about the potential terror risks of attending.

The country has been under an official state of emergency since the ISIS terror attacks in Paris on November 13 last year, in which 130 people were killed. An ISIS cell connected to the Paris attacks then went on to strike the capital of neighboring Belgium in March, killing 32 people.

The French government extended the state of emergency until the end of July to cover the Euro 2016 soccer tournament, which is being held in the country, and the Tour de France cycling race this summer.

However, French authorities appear under-resourced to respond to the jihadist threat.

Following the Paris attacks, Hollande vowed to expand the government's counterterror resource sin response to ISIS, doubling the number of surveillance officers over five years to 10,000.

Intelligence officials have previously told CNN that it takes 15 to 20 staff to monitor a suspect around the clock -- and France has about 11,000 people on its "fiche S" list, used to flag radicalized individuals considered a threat to national security.