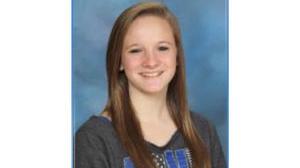 (CBSNews) DANVILLE, Ky. — A 15-year-old central Kentucky girl was indicted by a grand jury in connection with the death of her stepmother, reports CBS affiliate WLKY.

Jenna Oakley is charged as an adult with complicity to murder. Police arrested Oakley and her boyfriend, Kenneth Nigh, in New Mexico last month, two days after Oakley’s stepmother, Rhonda, was found dead in her Boyle County home.

The two were found in Rhonda Oakley’s stolen vehicle, according to police.

Nigh, 20, is charged with contributing to the delinquency of a minor. He has been hospitalized in Texas for more than a month after attempting to hang himself following his arrest, according to police.

The commonwealth’s attorney said he’s a suspect in the case, but has not been charged because of his medical condition.

Jenna Oakley is charged with complicity to murder and theft by unlawful taking over $10,000. She’s being held at a juvenile detention center.

“She will continue to be held in that type of facility until either she’s released or she turns the age of 18. At that point, she would be transferred to an adult facility,” commonwealth’s attorney Richie Bottoms said.

Jenna Oakley is being held without bond.