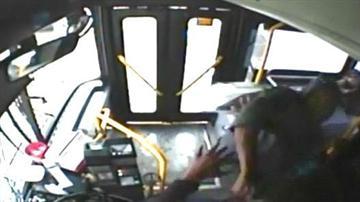 KENOSHA -- A Kenosha bus driver fired after exchanging punches with teen passenger  is getting his job back.

Surveillance video from the January 17 incident showed the teen rushing to the front of the bus and punching Scotty Wells twice before Wells got up to defend himself while the bus was moving.

The bus continued rolling as the tussle went on, crashing into parked cars as passengers looked on.

Wells was fired after the incident, but a spokesperson for the transit union confirmed that Wells has been reinstated.

He will have to serve a 5-day suspension for continuing to punch the teen after he was down.

The Kenosha Tremper High School student faces charges of recklessly endangering safety, and battery against a transit bus driver. Both charges are felonies.