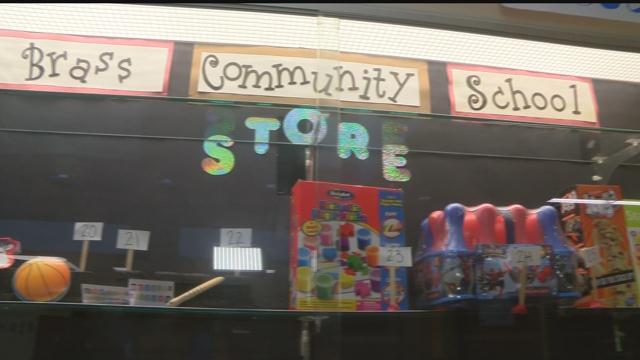 Students in the Kenosha Unified School District will participate in an initiative called P.B.I.S. which stands for positive behaviors interventions and support, for a second year in a row..

It is a framework model used in school districts across the country and was introduced in Kenosha last year.

It's goal is to promote and reward students for good behavior, in places like the hallway, cafeteria, and bathrooms.

At Brass Community School, students are rewarded with 'brass bucks'.

Students can then use those bucks to redeem items in the school store known as the 'Doghouse.'

There are also rewards for an entire grade, if enough bucks are collected.

School staff say they have seen a change in student behavior since starting the program last year, and think their results will improve this school year. .

"The data here at brass that this is working. The kids are changing behaviors without negative consequences," said principal Joel Kaufmann.

Randy Hoover, the PBIS internal coordinator said, "We really found that just that positive praise, that's what did it for them. They just wanted to hear us tell them 'hey, I appreciate you and you're doing a fantastic job.' The great part about it is we also noticed those kids who are making poor choices really wanted to hear the same things so some of those poor choices they were making stopped happening."

Teachers admit there will always be some sort of issues that will arise. But they are hoping since more students are paying attention and spending more time in the classroom instead of detention at the principals office, the overall grades at the school will improve over the coming years