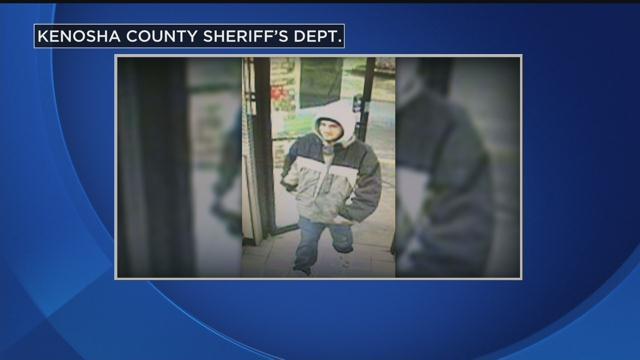 Kenosha County Sheriff deputies need your help finding a man whom, they say, stole a pickup truck from a local business early Wednesday morning, and used a stolen credit card. The truck's owner, Kevin Thomas, says the credit card belongs to his wife and the bad guy took it out of her car.

It all started around 4:30 am when two of Lindsey Thomas' credit cards were used at a 7-11 in Kenosha County.

"Did pay at the pump with one credit card to fill up the truck and then they went in to the convenience store for, presumably snacks, and used a different credit card," Lindsey said.

When something seemed sketchy, the clerk called the sheriff's department. Detectives used Facebook to track Lindsey Thomas down and they called her.

"From that point, we walked outside to check the vehicle to see if my wife's purse was still in there, and at that point I'd seen my plow, pick up truck and trailer were missing," Kevin said.

What's making them scratch their heads even more is why someone would steal a truck with his logo and phone number on it.

"Very big stickers drivers side, passenger side and tailgate," Kevin said. "I have no idea, other than they wanted the plow or the trailer off it and they were all connected."

Around the same time, just down the street, Ryan Brand said someone rummaged through three of his cars. Even though Brand doesn't think anything was taken, he feels for his neighbors.

"Hopefully they get the truck back down there and this guy can sit back in a county jail somewhere and relax," Brand said.

Lindsey and Kevin Thomas are just happy that convenience store worker has such a sharp mind.

"Thank you, it was a huge relief," Lindsey said.