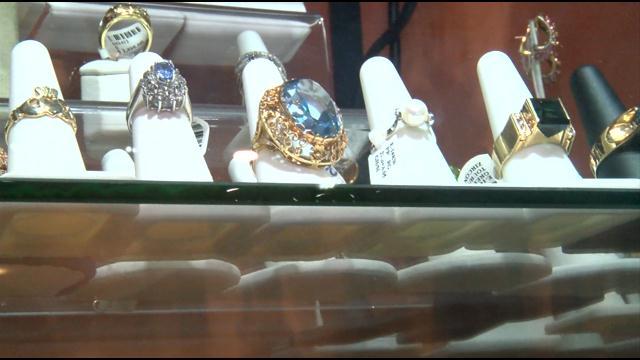 (CBS NEWS) Diamonds are supposed to be forever, unless, as some consumers are alleging, you shop at Kay Jewelers.

Some customers are claiming that after they took their diamond jewelry to Kay Jewelers, the rare stones were mysteriously replaced with cheap imitations. Kay said that it is "actively reviewing this issue." Shares of Signet Jewelers (SIG), Kay's parent company, fell as much as 11 percent on Thursday, although the share plunge came after the company's earnings fell short of analysts' estimates.

Chrissy Clarius told BuzzFeed that she would bring her $4,300 engagement ring, which was bought at Kay Jewelers, to Kay every six months to get it inspected, as this was part of the company's gemstone guarantee that insures the stone will "last forever." After taking the ring in February for its six-month checkup, she said the Kay employee couldn't find the diamond's certification number. Suspicious, she took the ring to another jeweler, who tested the stone and declared that it was moissanite, a cheaper stone.

"I felt sick to my stomach," Clarius told the publication. She said she believed the original diamond was replaced during an earlier repair at Kay, and that she had never taken the ring to another store for repairs.

Clarius said when she took the ring to Kay for testing, they said the stone was a diamond. Another jeweler also said it was moissanite, however.

A Facebook page called Boycott Kay Jewelers has become a clearing house for complaints, with consumers alleging issues including poor jewelry construction, shoddy repairs, and rings that were swapped out for other bands.

Clarius, for her part, wrote on Facebook that she's filed a police report, a complaint with the Better Business Bureau, and the attorney general's office.

In a statement, Kay said that the chain has "rigorous processes in place to help ensure this won't happen. When a guest brings their jewelry in for repair or service, it is diamond tested before it is sent out and when it is returned." It added, "With that being said, we are actively reviewing this issue, as we do all customer concerns brought to our attention, as part of our commitment to customer care and continuous improvement."

Several more women claim they've had similar problems with Kay, according to BuzzFeed. One woman said she was suspicious after her ring was resized at Kay's because it lacked the sparkle that it had had before she left the ring there. An employee told her it was because she hadn't seen the ring for a while, but when she asked another jeweler to check the certification number on the diamond, she learned that it didn't match the stone in her ring.

She said when she returned to Kay to complain, they located her diamond and returned it to her, but she said the experience was stressful.

She noted, "It is a ring, it is a material possession, but it's so much more than that."