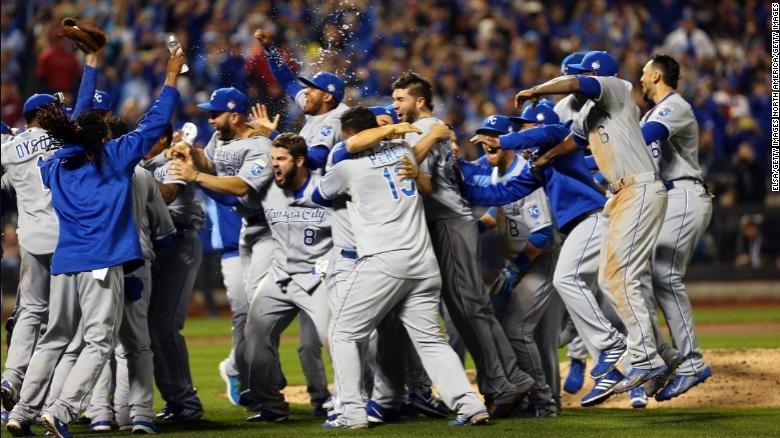 (CNN)The Kansas City Royals rallied to beat the New York Mets 7-2 in Game 5 to win the World Series. The 12-inning game started Sunday evening and stretched into early Monday in the East.

The Royals won the Series 4-1. It's the team's first World Series title since 1985.The Royals blew open the game with five runs in the 12th inning.

First, Jarrod Dyson scored off a hit by Christian Colon -- his first at-bat in the postseason. Then Alcides Escobar hit a double down the third base line, allowing Colon to score. Finally, Lorenzo Cain hit a base-loaded double that drove in Paulo Orlando, Escobar and Ben Zobrist.

What happened in the 12th was even more dramatic considering where the Royals had been in the ninth.

The Royals were down -- and seemingly out -- 2-0 in the top of the ninth when they scored a couple of runs to tie the game.

And just like that, for the second time in the series, the Mets and the Royals had to go extra innings to settle things.

Game 1 had gone on for 14 innings, the longest Game 1 in World Series history. Game 5 went on for 12 innings, delaying the Royals' celebration at Citi Field until early Monday. This was also the first World Series with multiple extra-inning games since 2001.The starting pitchers in the game were nothing short of phenomenal.

For the Mets, the Dark Knight -- better known as Matt Harvey -- was simply on fire, pitching into the ninth inning and throwing 111 pitches, giving up two runs and five hits.

He left the field at the end of the eighth inning with chants of "Harvey" raining down on his ears. Later fans chanted "We want Harvey," urging the Mets to keep him in for the ninth, despite the many pitches he had thrown. When he emerged from the dugout as the ninth inning began, Citi Field exploded in cheers.

After he allowed an RBI double from Kansas City's Eric Hosmer later in the inning, Harvey was pulled, but no one could argue he was anything but dominant on the game's biggest stage.One of the big questions coming into Game 5 was how Royals' starting pitcher Edinson Volquez would respond after the death of his father before Game 1. Volzuez briefly left the team to go to the Dominican Republic to mourn his father's passing.

Volquez gave up a lead-off home run to the Mets' Curtis Granderson during the bottom of the first, but after that he seemed to steady himself. He tossed 90 pitches through six innings, giving up two hits and two runs.

Royals' manager Ned Yost praised Volquez's effort in the face of his grief. "He is popping," Yost said during the Fox broadcast.