Kaci Hickox's boyfriend: 'We don't believe that we can get anyone sick' 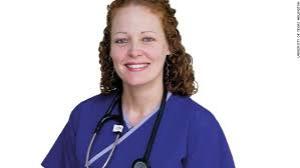 The boyfriend of a Maine nurse who defied an Ebola quarantine is speaking out, saying isolating returnees from West Africa will affect their partners as well.

Nurse Kaci Hickox recently returned to the United States after treating Ebola patients in Sierra Leone. She's been in a tense standoff with state authorities, who want her to stay home for 21 days -- the incubation period for the deadly virus.

Hickox says she is healthy and has no symptoms and forcing her to stay home is unconstitutional.

Her boyfriend, Ted Wilbur, says significant others are affected too.

\"This thing doesn't just affect Kaci,\" he told CNN affiliate WCHS. \" And when people are going to be coming home from different parts of the world and West Africa, it's just not affecting the aid workers and what not. It's affecting their partners.\"

'We're not trying to push any limits'

The two went out on a bike ride Thursday -- trailed by a police cruiser and journalists.

\"If anyone in the community might have noticed, we went bicycling that way. We did not go into town,\" he told the affiliate.

Wilbur said they are not trying to cause trouble and want the community to feel at ease.

Maine Gov. Paul LePage said negotiations with Hickox had failed, adding that he would \"exercise the full extent of his authority allowable by law\" to keep her away from public places.

\"I don't want her within three feet of anybody,\" LePage told the affiliate.

Hickox's quarantine is scheduled to end on November 10.

Governor: She is 'not acting as smart'

The governor said venturing away from her house is jeopardizing her safety.

\"The reason there's a police car there when she does that is to protect her more than anybody. 'Cause the last thing I want is for her to get hurt,\" he said. \"But at the same token, her behavior is really riling a lot of people up, and I can only do what I can do. And we're trying to protect her, but she's not acting as smart as she probably should.\"

The state has made it clear it's going to do something. But its hands are tied.

\"The first thing the governor has to do, which he has not yet done, is get a court order which requires her to stay in quarantine,\" CNN senior legal analyst Jeffrey Toobin said. \"There is no court order now. She's not violating anything by taking a bike ride or leaving her house.\"

There's no guarantee the governor will be able to get a court order, Toobin said, because science does not consider her in a communicable situation.

It's unclear what the exact sticking points are between the two sides.

At first, Maine officials said they wanted her to remain at home for 21 days. Since then, they've said they want Hickox -- who has twice tested negative for Ebola and says she feels healthy -- to avoid public places during that time.

Making a point with bike ride

Hickox has said state officials are the ones being unreasonable. She contends the U.S. Constitution and science are on her side.

Hickox has said she's willing to compromise with the state, and she's open to restrictions barring her from public transportation and limiting her to Fort Kent, a town of 4,000 on the Canadian border.

Her attorney, Norm Siegel, said the couple went for the bike ride to highlight that she could be out in public without interacting with people.

When she returned from a month working with Doctors Without Borders in Sierra Leone last week, Hickox had an elevated temperature at an airport in Newark, New Jersey, officials said. She was put into an isolation tent.

She blasted New Jersey Gov. Chris Christie for enforcing a new policy that required anyone showing symptoms of Ebola, including an elevated temperature, to be isolated.