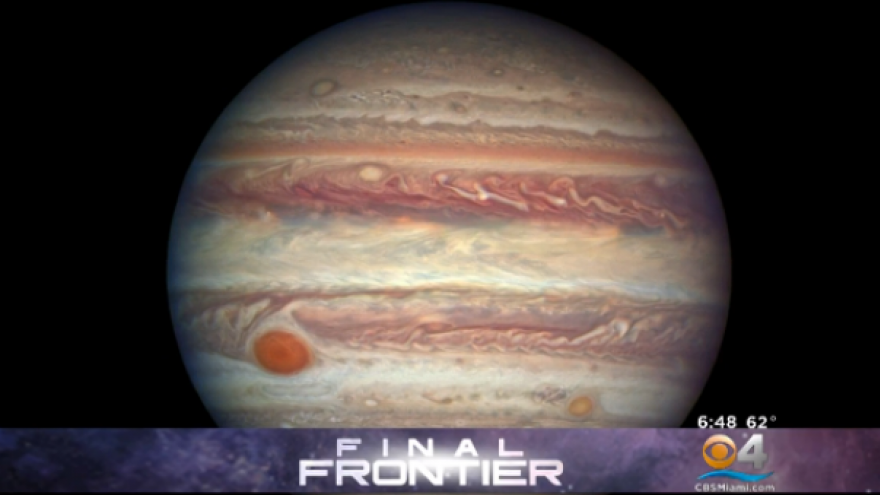 MIAMI (CBSMiami) – Go outside and look up! For the next couple of days, Jupiter, the largest planet in our solar system, shines the biggest and brightest it will all year.

On April 8th, Jupiter will make its closest approach to Earth this year, making now the best time to view the giant planet.

To the naked eye, Jupiter appears as a very bright star, but with a good pair of binoculars or a small telescope, you should be able to see details on the planet and spot its four largest moons.

NASA scientist Dr. Michelle Thaller said Jupiter over the next few nights Jupiter will be making its closest approach to the Earth in the nxt 13 months.

“What’s happening tonight is something called ‘opposition’ and that means that the Earth is on the same side of the Sun as Jupiter. Earth and the Sun are on opposite sides of the sky, that’s the closest we ever get. So tonight the distance will be about 425-million miles away, so Jupiter is practically next door,” said Dr. Thaller.

Thaller added that the Hubble telescope is also taking advantage of Jupiter’s relatively close proximity and sending back some dramatic new images.

“They are just so gorgeous. So see the famous red spot, Jupiter is so big you could fit a thousand Earths inside it,” said Thaller. “The red spot, of course, is a famous hurricane that has been blowing for over 150 years.”

Thaller said that Jupiter’s hurricane is larger than Earth and has been mysteriously shrinking. Images from the Hubble are just one the tools scientists use to monitor those changes.