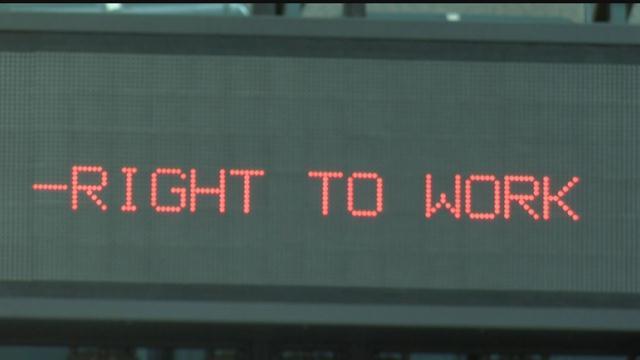 (AP) -- A Dane County judge has refused to stay his ruling striking down Wisconsin's right-to-work law.

Judge William Foust found the law unconstitutional earlier this month, ruling it amounts to an illegal taking on union services without compensation. The state Justice Department has filed a motion asking Foust to stay the ruling and leave the law in effect while the agency appeals.

Foust ruled during a hearing Monday that state attorneys haven't shown they'll succeed on appeal and there's no evidence the state will suffer if his original decision stands.

Right-to-work laws prohibit businesses and unions from reaching agreements that require all workers, not just union members, to pay union dues. The laws allow nonunion workers to benefit from union representation for free.

“We are disappointed our motion for stay in the right-to-work case was denied in Dane County Circuit Court and plan to seek stay in the Court of Appeals, where we feel confident this law will be upheld.”

Phil Neuenfeldt, President of the Wisconsin AFL-CIO issued this statement:

“We are pleased with Judge Foust’s decision stating clearly again that Right to Work is unconstitutional in the state of Wisconsin. Rather than respecting the constitution, Gov. Walker and Attorney General Brad Schimel are trying every legal maneuver in the book to advance their own partisan agenda and deny workers their right to a meaningful union.”