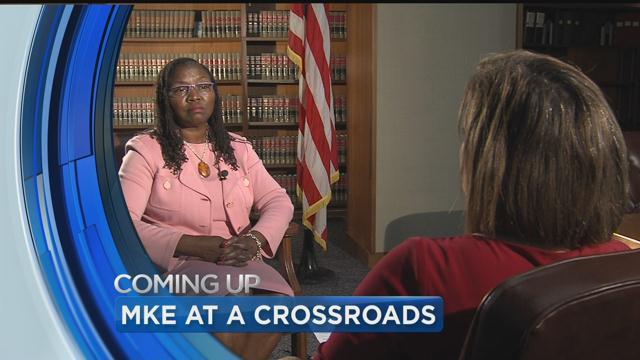 Chief Judge Maxine White says Milwaukee County has one of the best criminal court systems in the nation.

There are 47 courts.  21 for criminal cases. Eight juvenile judges as well as four courts assigned to homicide and sexual assault and a non fatal shooting court.

There are an additional five general felony courts that handle gun cases.

The question of resources was part of a lengthy sit down interview conducted by CBS 58 News as it launched a special initiative "Milwaukee at a Crossroads."

The one hour, commercial free special aired September 6th with follow up reports to keep the conversation going.

"We process and adjudicate cases timely and effectively," Judge White told CBS 58's Michele McCormack. "More so than most jurisdictions in this nation. The problem we have is to find intervention for families who are involved in serious crisis. Whether it's neighborhood violence or teens killing each other."

The judge says before looking to bump up levels of law and order, perhaps we should consider creating opportunities for convicts so they can find a better life, without crime, once they serve their sentences.

"If we're going to be a nation of lock up and we know that the people return, we have to do something while they're being locked up and after they return. to improve the qualities of life to make our communities strong."

Judge White grew up in Mississippi and knows well the challenges of the minority community and recalls the indignities her parents suffered with racism.

"I come from a time where I really believe in the American dream. In order for it to be a reality, is more people have to get out of their comfort zone and provide the adequate resources these kids need.

She believes if the community addresses needs on front end,  then there would be less of a disconnect with the unfair expectations the public has about what the courts can provide.

"If we did more for education, prosperity health and wealth early on and fill those gaps, we wouldn't have these serious problems."