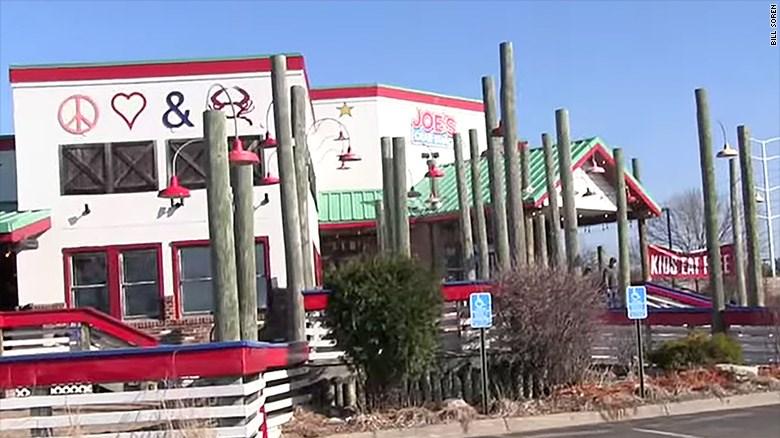 (CNN Money) Customers at a Joe's Crab Shack in Minnesota got quite the shock when they realized their table decoration depicted a hanging.

To make matters worse, the photo presented the real-life killing as a joke. The photo is labeled "hanging at Groesbeck, Texas on April 12, 1895." A cartoonish word balloon above the doomed men reads, "All I said was 'I don't like the gumbo!'"

Joe's Crab Shack customer Tyrone Williams said he immediately recognized that the two men on the gallows were black, and they were surrounded by a crowd of white people.

"It's disturbing and disappointing," said Williams to CNNMoney. He took a picture of the table at the Roseville restaurant on Wednesday and posted it on Facebook (FB, Tech30).

Williams said he alerted the managers and other staffers, some of whom were African-American.

"The rest of the black staff didn't know it was there," said Williams, even though they told him the table, which has the image laminated on top, had been there for 10 years. "And they came over to see it and they were shocked and appalled."

He said the manager was apologetic and that Williams "kind of felt bad for him, having to deal with that." He and his friend Chauntyll Allen were offered a free meal, which they declined.

"I woke up this morning to about a hundred or so hate mails and it shows where we are in America right now," he said. "Hatred is still alive."

Joe's Crab Shack, which has 130 locations, posted an apology on Facebook. And an executive for the parent company, Ignite Restaurant Group, told CNNMoney that the Roseville restaurant got rid of the table.

"We understand one of the photos used in our table décor at our Joe's Crab Shack location in Roseville, MN was offensive," said Ignite COO David Catalano, in an email via a company spokesman. "We take this matter very seriously, and the photo in question was immediately removed. We sincerely apologize to our guests who were disturbed by the image and we look forward to continuing to serve the Roseville community."

Nekima Levy-Pounds, president of the Minneapolis chapter of the NAACP, condemned the image, which she described as "two black men being lynched by a white mob in Texas."

"This disturbing incident that occurred at Joe's Crab Shack demonstrates that racism is still alive and well in this country," Levy-Pounds wrote on Facebook. "It is sickening to know that someone would make a mockery of black men being savagely lynched and then use that imagery for decorative purposes in a restaurant."

Chauntyll Allen, who accompanied Williams on his trip to Joe's, says in a video by self-described "citizen journalist" Bill Sorem, that she has a friend who saw a different hanging photo used as decoration at a Joe's Crab Shack in the Los Angeles area. And Williams says on the video that he has received a report of a similar image in Florida.

"So I do believe this is around the nation," said Allen. "They want to uphold the white supremacy ideal and so therefore they're going to spread it throughout the nation. It's not just going to be in one table in one spot."

Ignite did not immediately respond as to whether hanging images are on other tables at other restaurants.